Michael Moore has released his latest film “Slacker Uprising” as a free download for anyone in the US or Canada, with the video hosting and distribution being provided by our friends over at Blip.tv. Michael explains his reason behind the free download: “This is being done entirely as a gift to my fans. The only return any of us are hoping for is the largest turnout of young voters ever at the polls in November.”

“Slacker Uprising” takes place in the wake of “Fahrenheit 9/11,” during the run-up to the 2004 election, as I traveled for 42 days across America, visiting 62 cities in a failed attempt to remove George W. Bush from office. My goal was to help turn out a record number of young voters and others who had never voted before. (That part was a success. Young adults voted in greater numbers than in any election since 18-year-olds were given the right to vote. And the youth vote was the only age group that John Kerry won.)

What I encountered during the tour and the filming was both inspiring and frightening, so I thought, hey, this might make for a funny and enlightening movie! Each night, thousands would show up to volunteer in the Slacker Army against Bush. This drove local Republicans nuts. In one state they tried to have me arrested. At two colleges, rich donors offered to donate more money to the college if they would ban me from campus. Nearly a half-dozen universities kept the Slacker Uprising tour off their campuses. But there was no stopping this movement. By the time we got to Florida, 16,000 people a night were showing up.

It was clear that young people were the ones who were going to save the day — just as they are in this year’s election. 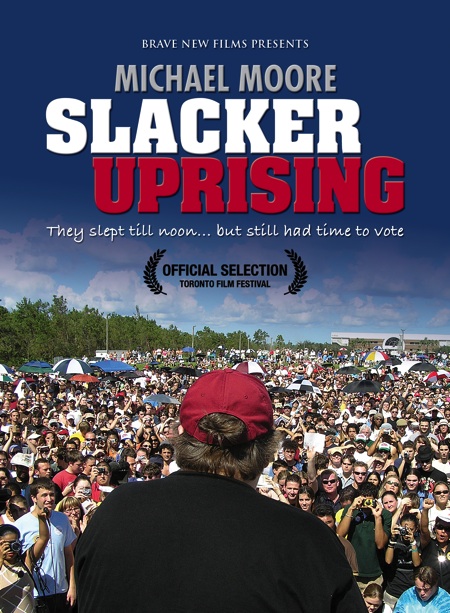 The film is also available on DVD and is currently screening around the country.