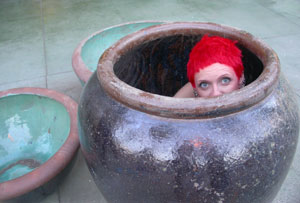 For many years San Francisco has been graced with the wit, insight, beautiful prose and lovely presence of Silke Tudor. Her ubiquitous and (for anyone curious about what is truly interesting in San Francisco) mandatory SF Weekly column Night Crawler debuted in 1994 and, with this weekly edition (August 18th-24th) will end an astonishing and magical ten-year run. Writing, particularly writing about a “scene” for a magazine or paper is often (at least partially) an exercise in self-promotion for the writer. The S.F. Weekly (along with The By Guardian and others weeklies that have come and gone) in addition to suggesting where to eat, dance, drink, hang out and blow things up has been a training ground of sorts and a stepping stone for ambitious young journalists and writers on their way to a shot at careers in Manhattan. Many of her colleagues and associates succumbed instantly to the tiniest of urgings and opportunities to immigrate with promises to write for the national periodicals (Spin, Salon, Rolling Stone etc.) or to write for “major” newspapers. Silke has proven to be the antithesis to this trend. She has turned down many solid offers over the years and chosen to stay here in SF and continue writing about our town & the truly special people and freaky serendipity that make this place what it is. Her writing style, already impressive when as an early 20’s punk-rock gofer at the Weekly she was recruited for the column, has evolved into a fine, subtle and polished prose that I am embarrassed to attempt to describe. Her obvious affection for the strange events and stranger people she has written about and the clearly deep love she holds for San Francisco in all its kooky glory is a palpable presence in her pieces and has became, over time, like a recurring character. As a journalist and writer Silke (in our opinion and that of many others) is the best San Francisco has ever had to offer. After this week, that’s it. San Francisco is a small town and there’s only so much to cover. The inexorable gravitational pull of New York has finally won out. I don’t think we’ll truly know how much we’ll miss Silke and Night Crawler until we’ve gone for several weeks without (once again) reading her wonderfully drawn, ever so personal accounts of the weirdest, stupidest, craziest, stickiest, most dangerous, sweetest, funniest, loudest and most inexplicable whateverthehellitis that we live with daily here in San Francisco. We’re really going to miss her.