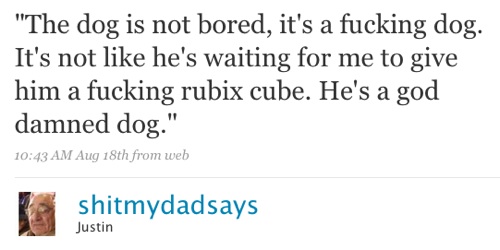 28 year-old Justin Halpern lives with his 73 year-old Dad who says some funny stuff, which Justin then posts to Twitter at @shitmydadsays. The account has been so popular it already has over 100K followers in less than a month.

UPDATE 1: MyHogtown tracked down one of the guys behind @shitmydadsays

UPDATE 2: Mark Milian interviews Justin Halpern, the guy behind @shitmydadsays for the LA Times. Justin now has a book deal based on his Tweets quoting his father.