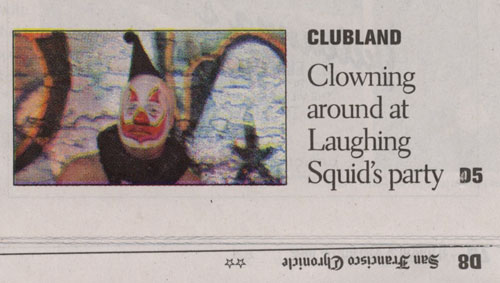 Lisa Hix wrote an article on the Laughing Squid 10th Anniversary Party for her “Clubland” column in the “Style” section of today’s Sunday The San Francisco Chronicle. The article can be found online at SF Gate.

Overall it’s a good article, but there are a couple of corrections that I wanted to point out:

– The “Burning Mandible” installation was created by Grant Irish, not Kal Spelletich.

– The inside area of the party was not an opening for Gale Hart’s “Why Not Eat Your Pet” show, but the other half of the Laughing Squid 10th Anniversary Party. The actual opening for Gale’s show took place on November 5th.

– The article gives the impression that Laughing Squid hosted Burning Man’s website, but in reality both burningman.com and laughingsquid.com were originally neighbors who were hosted on Brian Behlendorf’s hyperreal.org server.