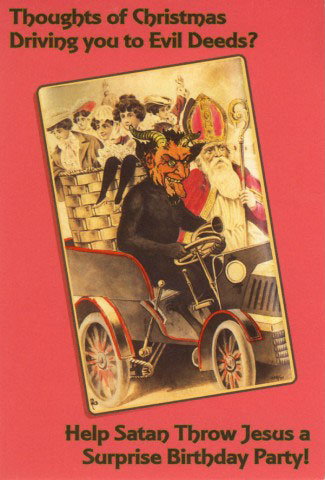 Madman Shannon O’Hare is back again, reprising his role of Satan, this time in Satan’s Christmas Comedy Cabaret which takes place December 26th at 12 Galaxies and on December 28th and 29th at The Dark Room. Both venues are in San Francisco and each night’s show starts at 8pm, with tickets $7.00-$10.00 sliding scale.

Ultimate evil is on the loose this Christmas season, when a deranged preacher and his evil minions use a virgin sacrifice to summon Satan to San Francisco. Unfortunately Satan has problems of his own. God’s tapped the Prince of Darkness to throw a surprise birthday party for Jesus. So Satan organizes a “roast” for Jesus.

Thus begins Satan’s Christmas Comedy Cabaret, a wild evening of comedy, live music, magical illusions, burlesque dances, organic puppets, and video clips. Remember the time Jesus got busted by the Romans for getting wine in the viaduct? We do, and we’ve got it on film! Some of the roast guests include Death, Thor, Judas, Gaia. Plus, you never know when an odd deity or relative will manifest itself to give JC the royal treatment.

The brainchild of Oakland artist Shannon O’Hare (Satan) Through Eternity Tonite Productions, this show brings in some of the finest (or at least oddest) performers from San Francisco, including Hal Robins (Ask Dr. Hal), members of Cyclecide, artists Flash, Zizi, Michael Peppe, Kimric Smythe, and a cast of other malcontents and evil nutcases. And as special guests on the 26th, musical artists the Hobo Gobbelins and Esmeralda Strange!

This is the third cabaret show for Satan & his pals. Previous shows “The Satan Show” at the Art Barn and “Attack of the Zombie Girls!” at Cyclone Theater have been hits with the audiences. And this one promises to be even louder and crazier than before.