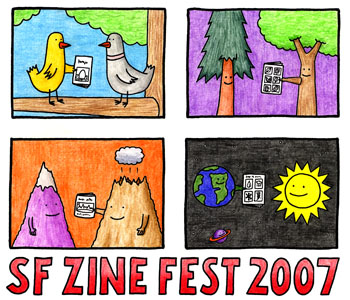 The Bay Area’s most beloved conference for zines, comics, and crafts, the Zine Fest is celebrating its sixth anniversary with a move to a beautiful new location, the Womenâ€™s Building. As always, the Zine Fest is free and open to the public! Over 50 small-press and DIY creators will be selling, trading, and otherwise sharing their work with over a thousand attendees. The exhibitors, from elder statesmen of the DIY movement such as RE/Search Publications to first time self-publishers, showcase the diversity, vitality, and ongoing exuberance of the small press movement. While the majority of the exhibitors hail from the Bay Area, creators from across the West Coast and country will be present.

Special guests this year are John Marr, writer of the seminal zine Murder Can Be Fun, a cavalcade of bizarre and often very funny tales of untimely death; and Joe Sayers, the cartoonist behind the weekly strip Thingpart and the recently released Teen Power!, a collection of hilarious comics all drawn in five minutes or less. Q &A sessions will be held with both special guests on Saturday. Several panel discussions and hands-on workshops will be held throughout the day on Saturday, including a class on the basics of silk screening taught by John Isaacson, whose book Do It Yourself Screenprinting was recently released by Microcosm Publishing. Other events include ongoing raffle drawings throughout the Fest and a special awards ceremony.