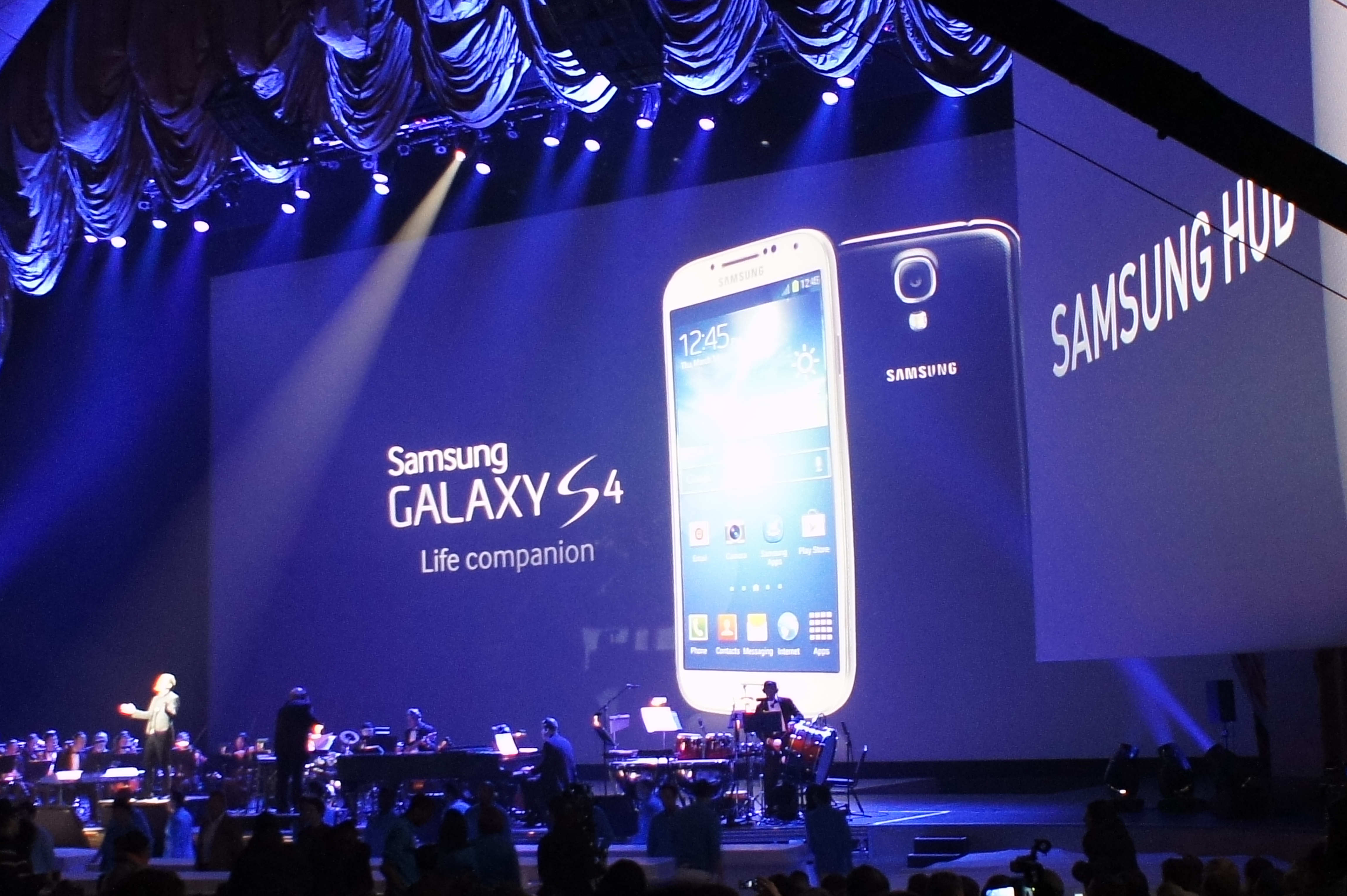 Samsung has officially unveiled its newest Android smartphone, the Galaxy S 4, at its Unpacked event. The 7.9mm thick, 130g weight device will feature a 5-inch, 441ppi Super AMOLED display, and is similar in form factor to the Galaxy Note II and Samsung’s previous flagship device, the Galaxy S III.

The large-scale unveiling event took place at Radio City Music Hall in New York City and according to Philip Elmer-DeWitt of CNNMoney it was “an information-packed presentation scripted as a Broadway show that would have bombed in New Haven.”

The S 4 runs Android 4.2.2 with TouchWiz and features a Samsung Exynos 5 or Qualcomm Snapdragon 600 processor based on the region, with 2GB of RAM and a 2,600 mAh battery. The phone will come with 16GB of on board storage with 32GB and 64GB options, and a microSD card slot. Samsung also revealed that the S 4 will have LTE and Bluetooth 4.0, and well as an IR blaster for remote control, a temperature and humidity sensor, and NFC.

Samsung is touting the phone’s 13-megapixel camera, and the S 4 will have a 2-megapixel front-facing camera. The company also unveiled the S 4’s Dual Camera feature, which allows users to insert themselves into main camera shots using the front-facing camera, and Sound and Shot, which lets you record five seconds of audio before you take a photo. Drama Shot will take multiple shots from a video and create a multi-frame collage. With Eraser, users can remove unwanted passersby from their photos.

Air View allows users to get a preview of and swipe through photos by hovering over the screen with a finger, similar to the Note II’s S Pen feature. Samsung also mentioned that it works with gloves. Samsung’s Air Gesture allows users to navigate the phone and answer calls with a swipe of their hand, without having to touch the screen. With Smart Stay, the phone detects whether or not you’re looking at it, and will automatically pause videos if you look away, and restart them when you look back. The phone doesn’t feature automatic eye-scrolling like rumors suggested, but users can scroll by tilting the phone up and down.

Samsung also introduced its S Translator software, which knows 10 languages including English, and translates speech-to-text and text-to-speech. S Translator also lets users take photos of menus, signs, etc., and translate them even without an internet connection. Samsung HomeSync comes with 1TB of cloud storage, and connects with your computer, phone, tablet, and TV. Samsung also detailed S Voice Drive, which connects the S 4 to a car via Bluetooth 4.0. Additionally, the company unveiled new S Voice features, which reads messages and lets users act on them, similar to Apple’s Siri. Samsung wants to make it easy for users to switch to the S 4 with Smart Switch, with which users can transfer their info to a PC, then to the phone.

Group Play lets users to play music, multiplayer games, and photos across multiple S 4s, and ChatON has video calling for up to three people. S Health can tell how much a user walks every day, and with accessories like an S band or a body scale the app can track and display that data.

For business and enterprise users, Samsung detailed its Knox software that the company announced at Mobile World Congress. Knox separates the phone into a work and personal side, to eliminate the need for multiple devices. While Samsung didn’t reveal pricing or carrier information, the company said that the S 4 will be available in Black Mist and White Frost in 155 countries beginning in April.

Here’s a look at it from today’s event: 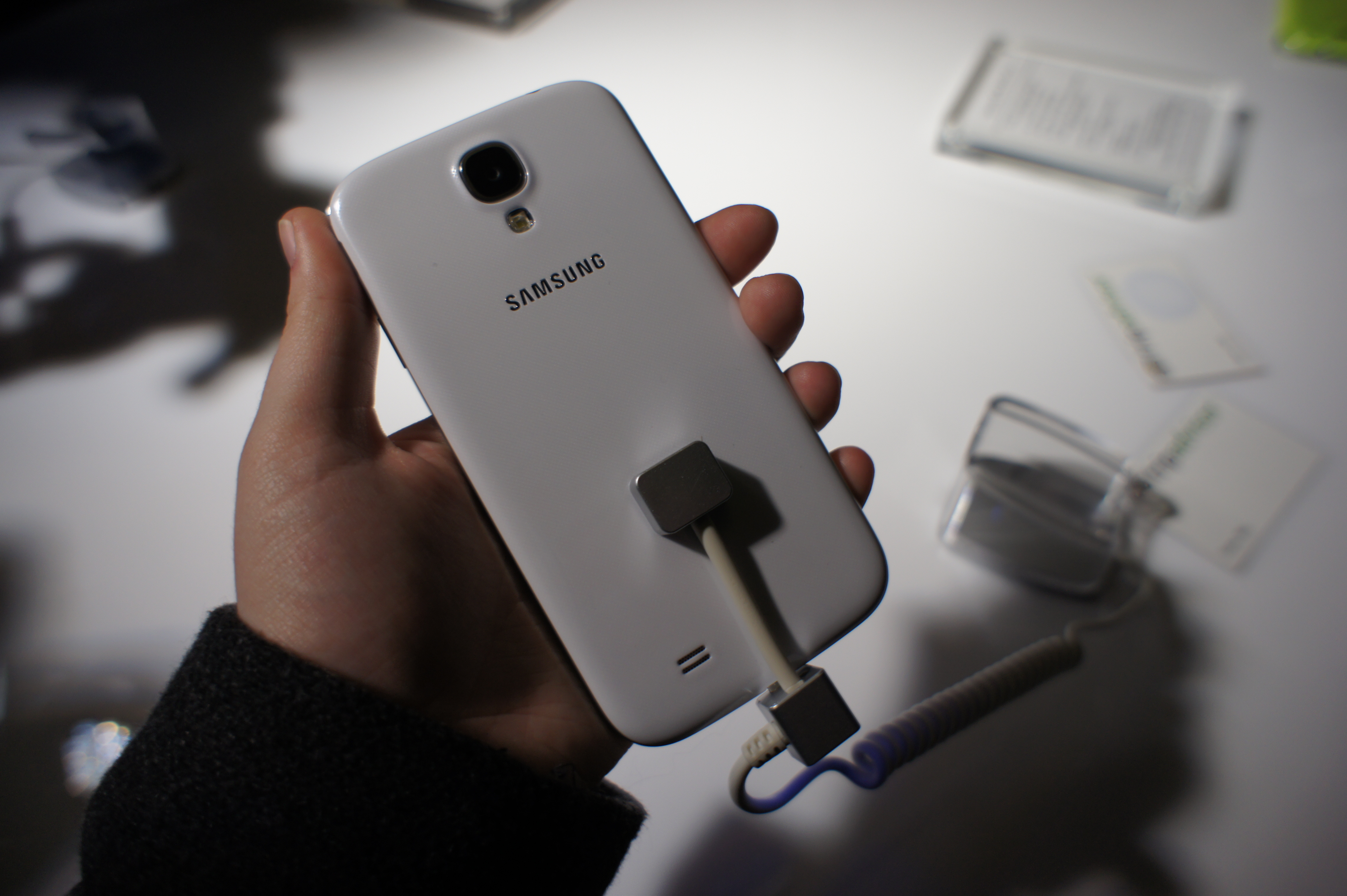 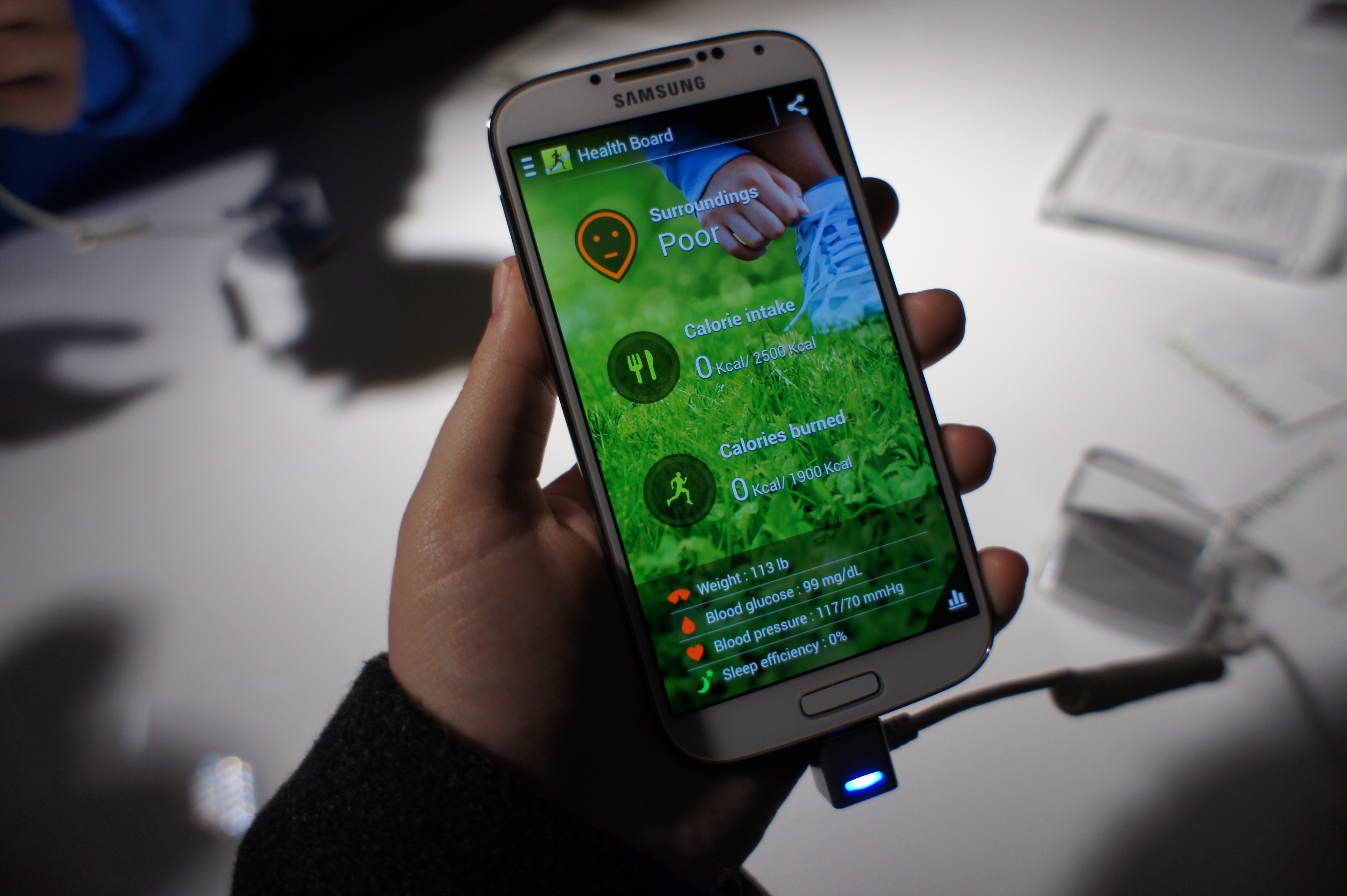 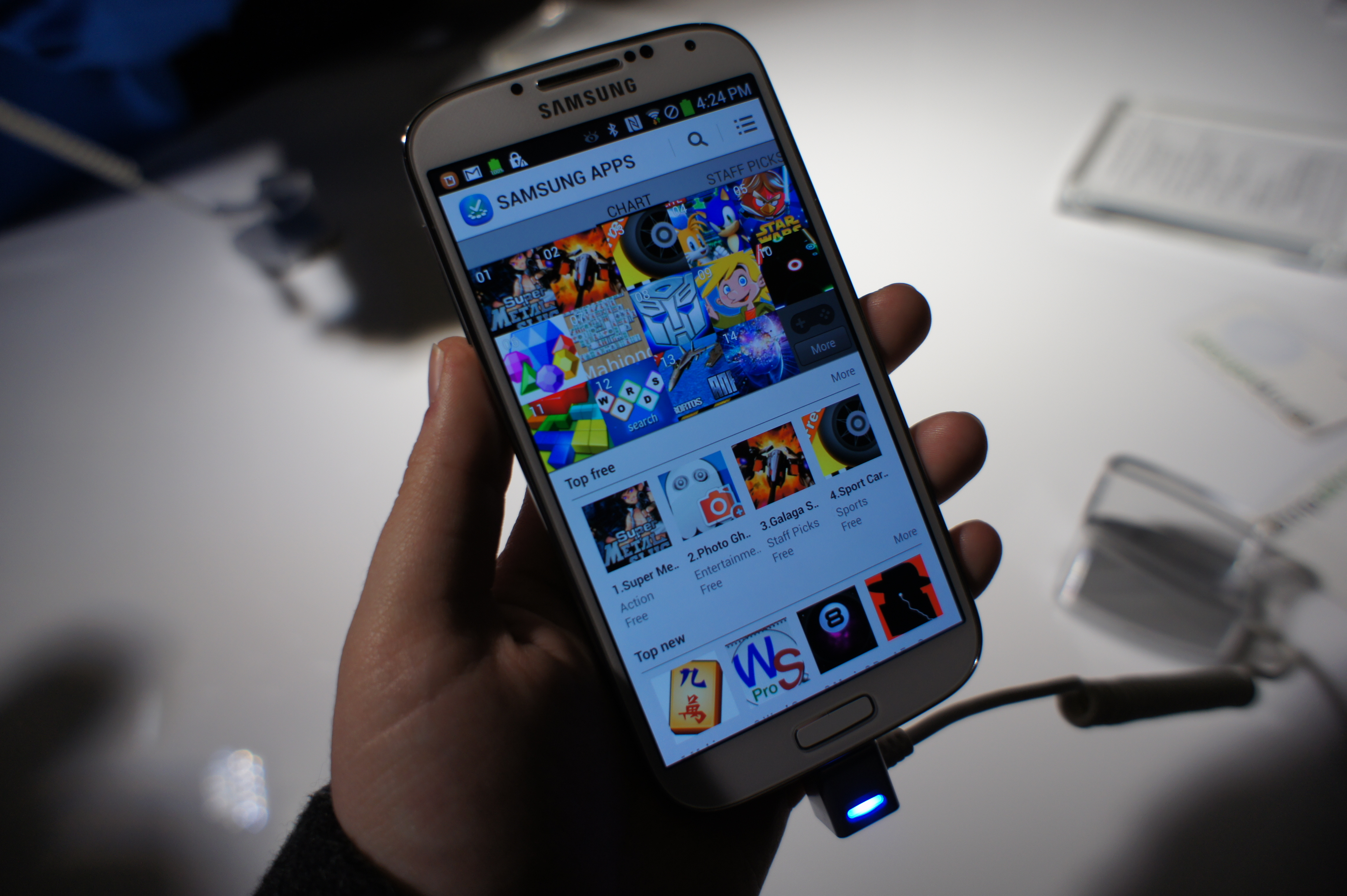 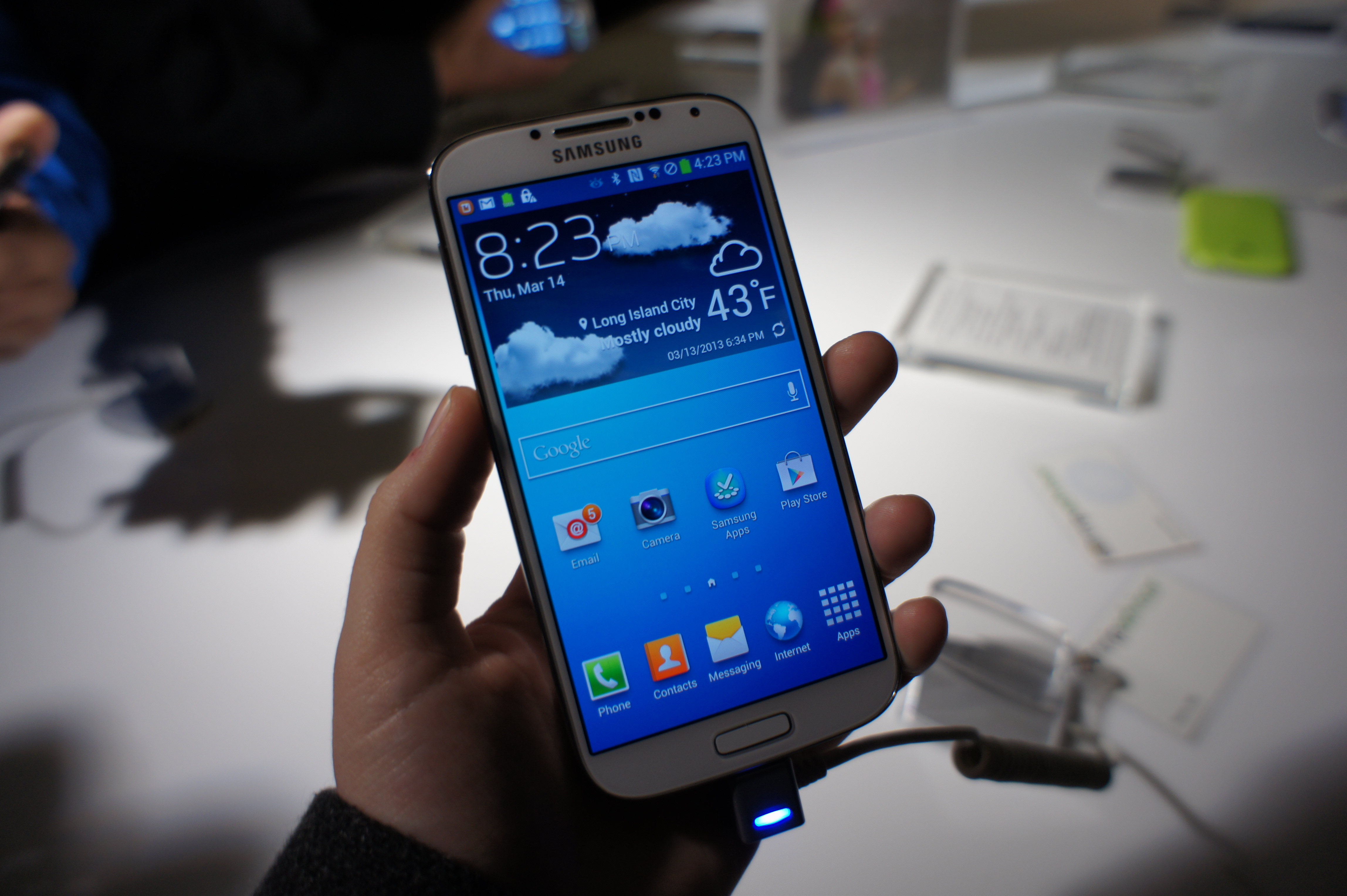