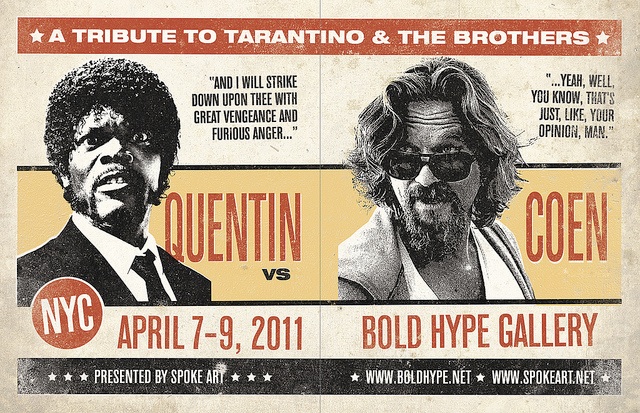 Spoke Art presents “Quentin vs. Coen”, an art show that pays tribute to the films of Quentin Tarantino and The Coen Brothers, takes place on April 7-9 at Bold Hype Gallery in New York City, with an opening reception on April 7th.

The first installment of our “versus” series, “Quentin vs Coen” looks to expand on the concept of a pop-culture themed art show by pitting together two directors who share overlapping or similar stylistic themes, and allowing the viewer to decide their favorites. Though there are many distinct differences between the bodies of work created by both Quentin Tarantino and the Coen Brothers, their crafting of generation-defining soundtracks, the penchant for ubiquitous violence, their casting of the same actors (notably Steve Buscemi), and their ability to constantly create spectacular works of varying genres (everything from Kung-Fu to crime dramas to westerns), have cemented both Quentin and the Coens as some of the most important directors of our generation.