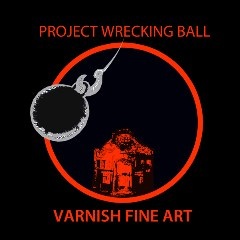 Varnish Fine Art, one of our favorite galleries in San Francisco, is scheduled to be demolished by the city through eminent domain to make way for the Transbay Transit Center. In response, Varnish has selected a group of over 25 artists to transform the gallery over the coming months as part of Project Wrecking Ball.

By continually changing the eviction/demolition date, short-notice, the government agency in charge of demo (Transbay Joint Powers Authority) has blocked Varnish’s ability to schedule further art shows, as they have since opening over six years ago. Instead, a fabulous group of invited artists will leave their studios in the Bay Area and beyond to create artwork on-site throughout the main gallery for this ongoing art event. The varied artwork will be created in paint, encaustic and photo-emulsion directly on the brick walls and on panels in addition to metal sculpture and kinetic art installations.

A San Francisco agency, the Transbay Joint Powers Authority (TJPA), is eliminating at least thirty three small, local businesses, including Varnish Fine Art, and numerous residences in order to demolish all properties and later resell land to fund their project. The TJPA is forcing Varnish, among the first tenants and years before the end of the lease, to vacate its nearly 100 year-old building for demolition. This gallery and wine bar will have to vacate 77 Natoma Street, but the business’ owners hope to re-establish Varnish Fine Art at a new location soon.

To kick things off, Project Wrecking Ball is having a launch party at Varnish Fine Art on Friday, September 25th, 7-11pm.