His most notable track, Alice, a composition of sounds from the Disney film ‘Alice In Wonderland’, was received with much success gaining 4 million views on YouTube as of December 2010. Pogo has since produced tracks using films like ‘Up’, ‘Mary Poppins’, ‘Harry Potter’, ‘The Sword In The Stone’, ‘Hook’, and ‘Terminator 2: Judgement Day’.

Pogo also creates all the videos for his songs, wonderfully mesmerizing staccato tone poems that not only evoke the spirit of the movies from which they were made, but often illuminate some new aspect about them.

Like many collage artists before him, such as Plunderphonics creator John Oswald, Pogo was drawn to the form by an innate desire to hear specific sounds repeatedly, and in a different fashion.

“For as long as I can remember, I have always detected small sounds in musical arrangements that appeal to me. I find myself with a natural desire to hear those sounds over and over. During my teenage years, it seemed logical for me to record these sounds and sequence them to form new pieces of music. …The essence of my work is to capture the elements of a scene or film that captivate me, and use them to make music that I can love.” [Interview on Youth Drip]

Given his chosen idiom, Pogo is understandably dedicated to changing the way we view copyright infringement in today’s remix culture.

“The purpose of copyright today is very questionable if I do say so myself. It may have originally been conceived to serve the creative mind in its expressive endeavours, but nowadays its used by business trolls as a mousetrap for profiting from equations and technicalities. It’s inevitable that if something is beautiful and inspiring to people, it will be used and promoted by thousands if not more. The human spirit is relentless. I don’t think Disney can copyright Alice’s voice any more than the inventor of the violin could have copyrighted its sound. The very idea is ridiculous.” [Interview with Melanie McBride] 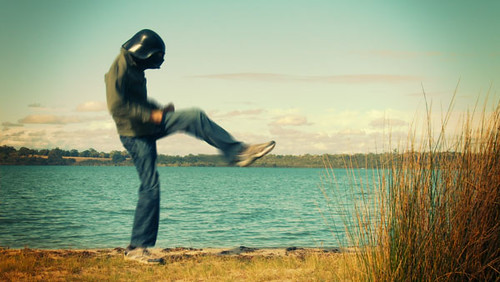 See Previously: Alice, An Electronic Remix of Alice In Wonderland