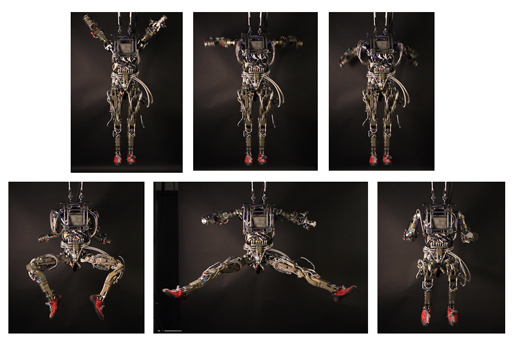 PETMAN is a bipedal humanoid robot by Boston Dynamics that mimics human walking, calisthenics, and other movements, in order to serve the US Military as a testing device for chemical protection clothing. And for added realism, PETMAN even sweats. Boston Dynamics is also developing AlphaDog, a four-legged all-terrain robot.

PETMAN is an anthropomorphic robot for testing chemical protection clothing used by the US Army. Unlike previous suit testers, which had to be supported mechanically and had a limited repertoire of motion, PETMAN will balance itself and move freely; walking, crawling and doing a variety of suit-stressing calisthenics during exposure to chemical warfare agents. PETMAN will also simulate human physiology within the protective suit by controlling temperature, humidity and sweating when necessary, all to provide realistic test conditions.