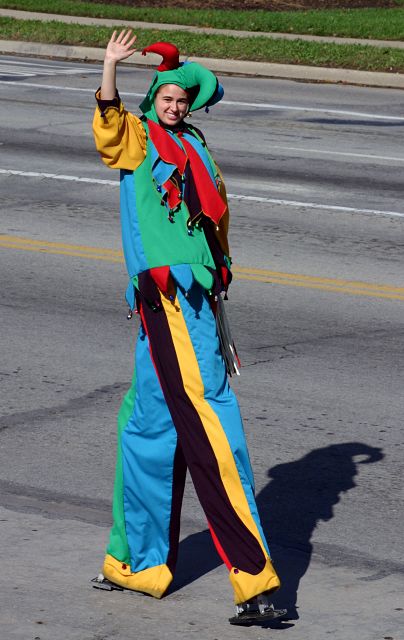 New York City’s 23rd Annual April Fools’ Day Parade begins at 12 noon, Tuesday, April 1st, 2008 at Fifth Avenue and 59th Street. The parade route has changed temporarily due to construction in Washington Square Park. This year the parade will detour east across Fourteenth Street to Union Square where the post-parade festivities will begin.

The New York April Fools’ Day Parade was created in 1986 to remedy a glaring omission in the long list of New York’s annual ethnic and holiday parades. These events fail to recognize the importance of April 1st, the day designated to commemorate the perennial folly of mankind. In an attempt to bridge that gap and bring people back in touch with their inherent foolishness, the parade annually crowns a King of Fools from parading look-alikes.

The public is encouraged to participate, in or out of costume, with or without floats, and may join the procession at any point along the parade route. Floats can be no wider than 10 feet and no longer than 25 feet. They can be self-propelled, towed, pushed or pulled. Customized bicycles, tricycles, baby carriages and aerial balloons are welcome. The Parade Committee assumes no liability for damages caused by satire. All participants are costumed look-alikes. Parade floats and marchers must be at 59th Street and Fifth Avenue no later than 11:30 a.m.

The New York April Fools’ Day Parade Committee has also posted an open call for George Bush look-alikes to participate in the parade.