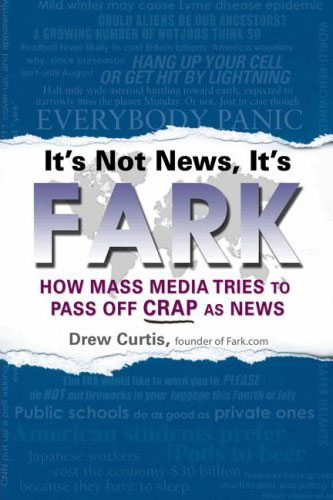 Drew Curtis, who runs the notorious offbeat news website Fark, has a new book out which was just released today:

“It’s Not News, It’s Fark: How Mass Media Tries to Pass Off Crap As News”

A drop-dead hysterically funny look at the go-to stories mass media uses when there’s not enough hard news to fill a newspaper or a news broadcast. It’s not media’s fault per se, the main problem is that ads have been sold. You can’t sell a blank newspaper full of ads, broadcast white noise bracketed by commercials, or expect people to visit a website full of ads with no content.

Purchase his book and Drew will buy you a beer. He’s currently doing a book tour, so catch up with him in a city near you.