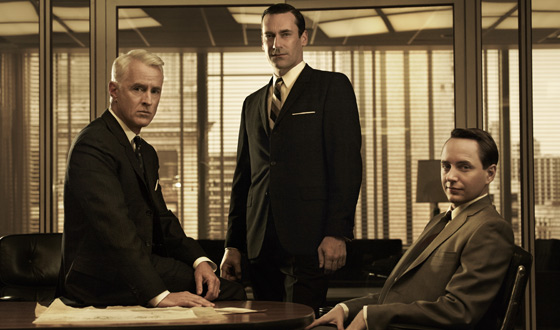 Season 6 of AMC series Mad Men will debut on Sunday, April 7, 2013 at 9/8c with a special two-hour premiere which was written by creator and executive producer, Matthew Weiner, and directed by executive producer, Scott Hornbacher. On April 14 at 10/9c, the series will move to its regular timeslot with an episode written by Jonathan Igla and Matthew Weiner, and directed by Jon Hamm.

Entertainment Weekly spoke with Weiner about the episode and he says, “If you like the show, there’s a good chance you’ll like the premiere…. It is different than last year’s in a sense that it was my idea and I was just trying to give bang for a buck to an audience that I didn’t want to lose because we’d been away for so long. This year it’s really constructed like a film. It is its own story and hopefully it foreshadows the rest of the season…. You should know what happened at the end of last season before you see the episode. The whole season is in reference to last season.”

“To be able to continue exploring the stories of these characters for a sixth season is an amazing opportunity,” said Weiner. “We love mining this world and look forward to bringing the audience stories that we hope will continue to both surprise and entertain them.”

“It is a calling card and a point of great pride for AMC to be the network home of Mad Men, led by Matthew Weiner and his brilliant team,” said Charlie Collier, President and General Manager, AMC. “We can’t wait to share season six with the world and what better way to start than with a special two-hour premiere?”