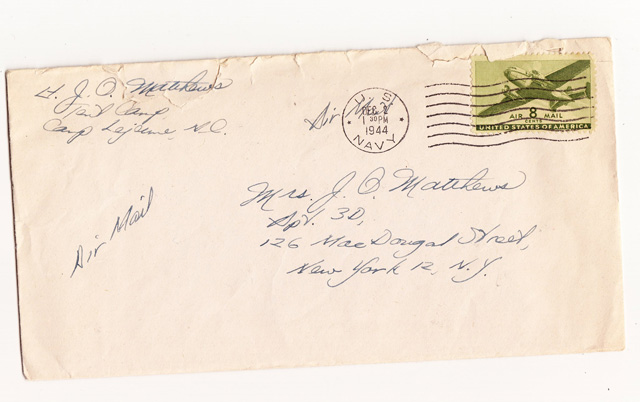 An old letter addressed to Lt. Joseph O. Matthews recently got delivered to Abbi Jacobson, a woman living in an apartment in New York City’s Greenwich Village, nearly 70 years late. So Abbi, with her friend filmmaker Todd Bieber, started the Lost Letter Project to try and find the intended recipient (or their relatives). Take a look at their video and see if you can help.

On the afternoon of May 29, 2013, Joseph’s son Scott reached out to the Lost Letter Project on Twitter:

#lostletterproject Joe was my dad. He survived the war and had me with Cut (lived in the Village) and 2 daughters in a 2nd marriage. Amazing

Hi we’re Evan and Zoe, two of Joseph’s 4 grandchildren! Thank you from our family, be in touch #lostletterproject twitter.com/Franklits/stat…