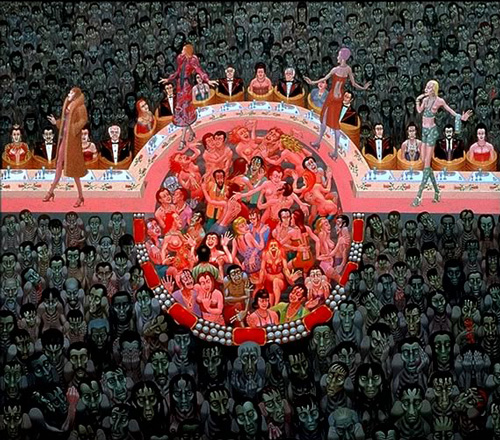 The Irving Norman retrospective “Dark Metropolis: Irving Norman’s Social Surrealism” that was recently on exhibit at the Crocker Art Museum in Sacramento, has moved to the Pasadena Museum of California Art (PMCA). The exhibition opens this Saturday, January 20th and runs through April 15th, 2007.

This exhibition, produced on the occasion of what would have been Irving Norman’s 100th birthday (1906-1989), features paintings that remain as poignant and relevant today as when they were first created. Norman’s monumental paintings reflect a troubled and turbulent world. His works teem with detail and are populated with swarming, clone-like humans. People are constricted by small urban spaces and modern technology, caught in the crunch of rush hour, and decimated by poverty and war. Shocking, revealing and profound, the paintings aim, as Norman himself described, “to tell the truth of our time.”

Irving’s wife Hela Norman will be in attendance at Saturday’s open reception.

A book with the same title as this touring exhibition, Dark Metropolis: Irving Norman’s Social Surrealism, has been published by Heyday Books.