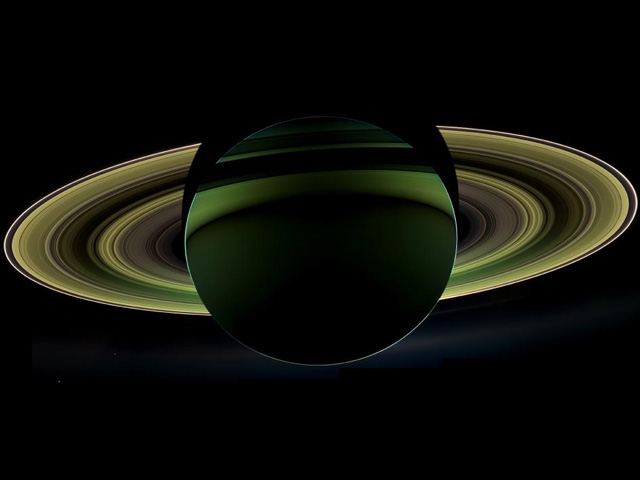 In October 2012, NASA’s Cassini spacecraft was perfectly placed in Saturn’s shadow and was able to capture this fantastic image, which has been titled “In Saturn’s Shadow.”

The cameras were turned toward Saturn and the sun so that the planet and rings are backlit. (The sun is behind the planet, which is shielding the cameras from direct sunlight.) In addition to the visual splendor, this special, very-high-phase viewing geometry lets scientists study ring and atmosphere phenomena not easily seen at a lower phase.

Since images like this can only be taken while the sun is behind the planet, this beautiful view is all the more precious for its rarity. The last time Cassini captured a view like this was in Sept. 2006, when it captured a mosaic processed to look like natural color, entitled “In Saturn’s Shadow.” In that mosaic, planet Earth put in a special appearance, making “In Saturn’s Shadow” one of the most popular Cassini images to date. Earth does not appear in this mosaic as it is hidden behind the planet.