Bristol Zoo Gardens now has a special enclosure for Humans (Homo sapiens), featuring the world’s most widespread species. The zoo has no idea who’s behind the prank, but they are amused by it and they have no intention of removing the sign.

The light hearted sign explains some well known human characteristics such as: “The human is one of the world’s most widespread species, and is present on all continents. In adolescence, the offspring adopt a more nocturnal lifestyle and engage in ritualised activities of drinking fermented liquids and dancing to rhythmical sounds, which scientists believe may help them to find a mate.”

It goes on to say: “The human diet is very adaptable to regional crop varieties and personal taste, with some groups able to live almost exclusively on chipped potatoes and sugary drinks.”

“Groups of humans are often fed by unrelated individuals in exchange for tokens made of paper, metal and plastic – behaviour which can frequently be seen inside this enclosure.” 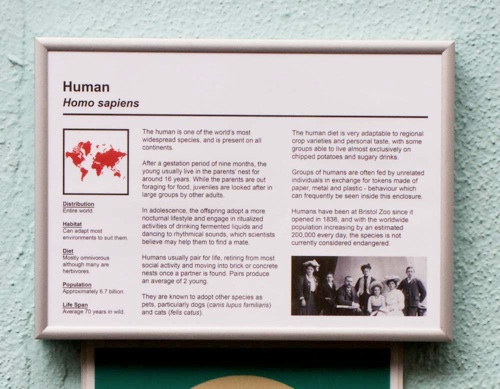