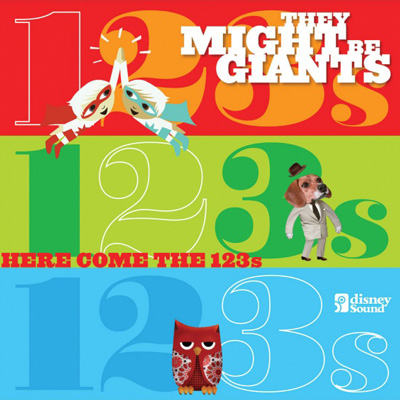 Here Come The 123s is the new kids album by They Might Be Giants, scheduled for release in February 2008. The CD/DVD is available for pre-order through Amazon.

The release date is early February, but it’s hard to imagine a more hotly anticipated kids’ CD arriving all year. Here Come the 123s, the companion piece to 2005’s Here Come the ABCs, is among the buzziest properties to hit kid-land since Laurie Berkner started shaking things up in the late ’90s. That’s because the artists behind it are the kinds of geniuses who merit a thousand-page expose in The New Yorker but also know how to bust out a proper jam. The Johns–that’s John Flansburgh and John Linnell to the uninitiated–have accomplished what no other respected rock band has done with these discs: they’ve blown the lid off They Might Be Giants’ otherwise cultish fan base and brokered themselves a deal with a couple of generations. TMBG have made bright and extremely quirky pop songs out of stuff you learn in preschool (the ABCs and 123s), and 2- to 10-year-olds, as well as their clever, discriminating parents, get to feel good–and maybe learn something, too. Highlights on a CD/DVD package with nary a dud among its 24 audio tracks include the disco-dipped “High Five,” the funk-flecked, Dust Brothers-produced “Seven,” and the head-trippy but hugely sensible (think about it) “One Everything.”

Here’s the video for “High Five!”, one of the songs on the new album.