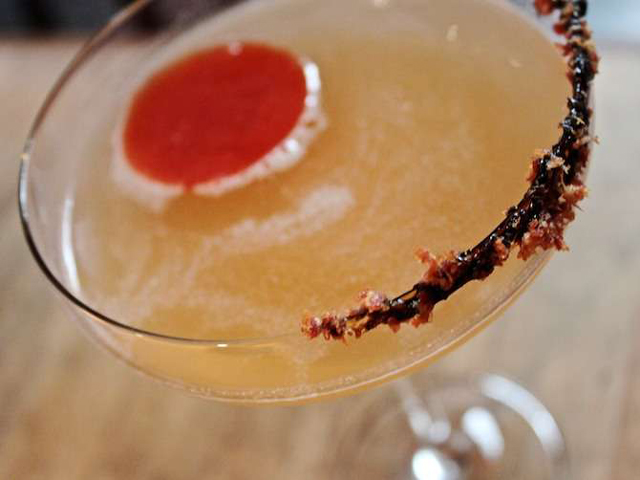 The Grilled Cheese Martini has become the must-have but not-on-the-drink-list boozy beverage in New York City’s Flatiron District over-21 restaurant and working cheese aging cave, The Cellar. It was no mistake that Kurt Beecher Dammeier of the recently opened Beecher’s Handmade Cheese store, where below lives his restaurant, The Cellar, devised this cheesy concoction in a place known for its cheese.

“I’d heard about people infusing vodka with bacon, and I thought, ‘well, shoot’,” Dammeier recalls. “I looked up the recipe and we basically just kind of followed along the same path.”

Dammeier and his crew soaked six piping hot sandwiches in 10 gallons of vodka, leaving the blend to marinate for 24 hours. Much of the spirit was absorbed by the bread, so bartenders had to vigorously press the sandwiches through cheesecloth to extract the infused liquid before freezing and skimming it…Beecher’s resident mixologists added basil and tomato to the mix, serving the resultant cocktail in a glass coated with balsamic syrup and rimmed with crisped Serrano ham.