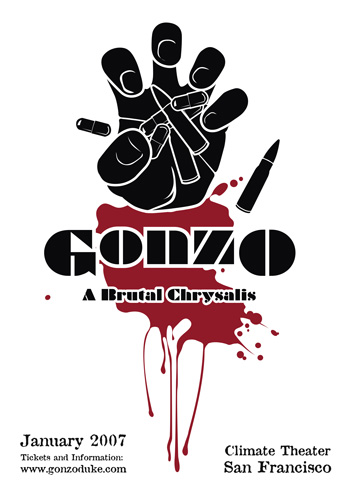 Gonzo, A Brutal Chrysalis is a new play based on Hunter S. Thompson that takes place “during the critical and catalytic years between 1968 and 1971”. The play runs from January 5th through 27th at the Climate Theater in San Francisco.

The rumors are true: Doctor Gonzo lives again. He was never truly dead and you know it.

Duke Productions invites you and everyone you know to come take a harrowing journey through the mind of Hunter S. Thompson, as no one has yet dared to present him. Experience the man behind the myth during the critical and catalytic years of 1968 and 1971–raw, unvarnished, and frightfully intimate. This show is not for the weak. Nor is it for children under fifteen, period (we will remove them and refund the money). The guns are not replicas. Don’t eat the slips of paper unless youâ€™re willing to go all the way. Don’t touch the typewriter–it bites. So does the good Doctor, so approach with due caution.

Warning: Opening night and closing night parties will be held on the rooftop of the Climate Theater, in the heart of San Francisco’s SOMA district. Bring your most demented, deranged, and outrageous expressions to both events and let them all hang out. All firearms and explosives must be declared at the door, and not via discharge or detonation. Anyone packing less than a 9mm will be laughed out of the theater. Note: Duke Productions will not bail you out of jail, so pack your own bond money or be damned. Better still, bring your own attorney as a precaution or amusement.