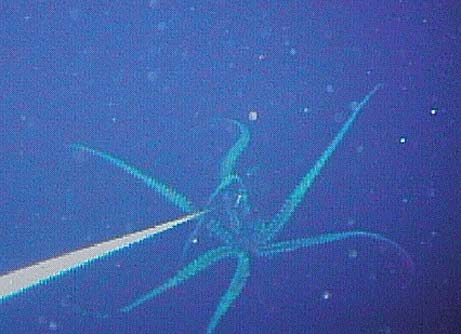 Well after all of this time, it finally has happened. Last September Japanese scientists shot the first photos ever taken of a living giant squid (Architeuthis) in its natural environment.

The animal, which measures roughly 25 feet (8 meters) long, was photographed 2,950 feet (900 meters) beneath the North Pacific Ocean. Japanese scientists attracted the squid toward cameras attached to a baited fishing line.

The scientists say they snapped more than 500 images of the massive cephalopod before it broke free after snagging itself on a hook. They also recovered one of the giant squid’s two longest tentacles, which severed during its struggle.

Thanks for the tip SÃ¸ren!