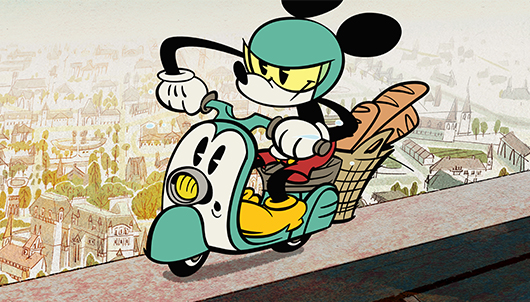 Disney is releasing a series of animated shorts that feature a familiar (but not-often-used) face, Mickey Mouse. According to D23, the cartoons were produced in 2D animation and they hark back to the animation style of the 1930s under the direction of Paul Rudish (Dexter’s Laboratory, The Powerpuff Girls). Each one present “Mickey in a broad range of humorous situations that showcase his pluck and rascality, along with his long-beloved charm and good heartedness.” The first to be released is “Croissant de Triomphe” with further shorts being shown starting June 28, 2013 on Disney Channel, Disney.com and the WATCH Disney Channel app.

…Designs for other characters have a similar approach, favoring a “rubber-hose” cartoon style for more exaggerated animation. Background designs closely reflect the graphic design sense of 1950s and 1960s Disney cartoons. And for those true eagle-eyed Disney fans, the production team has also included the occasional homage to other icons from the storied Disney heritage.

When Minnie’s cafe runs out of croissants, Mickey must deliver them to her fast, fighting wild traffic and other obstacles across Paris!