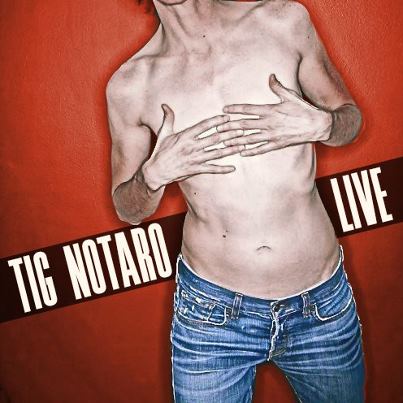 We recently posted about comedian Tig Notaro’s appearance on Conan where she described her (now legendary) performance at Largo theater in Los Angeles. At it, she announced to the audience that she was recently diagnosed with stage 2 breast cancer. Louis C.K. was at that performance, was inspired by it and has just made the audio of the set, titled Tig Notaro Live, available to purchase at his website.

Greetings to the people and parts of people that are reading this. Hi. This is Louis. I’m a comedian and you bought a thing from me. Well, I’m writing to tell You that there is a new thing you can buy on my website louisck.com. It’s an audio standup set by not me but another comedian named Tig Notaro. Why am I selling someone else’s comedy on my website?

Well, Tig is a friend of mine and she is very funny. I love her voice on stage. One night I was performing at a club in LA called Largo. Tig was there. She was about to go on stage. I hadn’t seen Tig in about a year and I said how are you? She replied “well I found out today that I have cancer in both breasts and that it has likely spread to my lymph nodes. My doctor says it looks real bad. “. She wasn’t kidding. I said “uh. Jesus. Tig. Well. Do you… Have your family… Helping?”. She said “well my mom was with me but a few weeks ago she fell down, hit her head and she died”. She still wasn’t kidding.

Now, I’m pretty stupid to begin with, and I sure didn’t know what to say now. I opened my mouth and this came out. “jeez, Tig. I. Really value you. Highly.”. She said “I value you highly too, Louie.”. Then she held up a wad of note-paper in her hand and said “I’m gonna talk about all of it on stage now. It’s probably going to be a mess”. I said “wow”. And with that, she went on stage.

I stood in the wings behind a leg of curtain, about 8 feet from her, and watched her tell a stunned audience “hi. I have cancer. Just found out today. I’m going to die soon”. What followed was one of the greatest standup performances I ever saw. I can’t really describe it but I was crying and laughing and listening like never in my life. Here was this small woman standing alone against death and simply reporting where her mind had been and what had happened and employing her gorgeously acute standup voice to her own death.

The show was an amazing example of what comedy can be. A way to visit your worst fears and laugh at them. Tig took us to a scary place and made us laugh there. Not by distracting us from the terror but by looking right at it and just turning to us and saying “wow. Right?”. She proved that everything is funny. And has to be. And she could only do this by giving us her own death as an example. So generous.

After her set, I asked Mark Flanagan, the owner of Largo (great club, by the way) if he recorded the set. Largo is set up for excellent recordings. He said that he did.

A few days later, I wrote Tig and asked her if I could release this set on my site. I wanted people to hear what I saw. What we all saw that night. She agreed. The show is on sale for the same 5 dollars I charge for my stuff. I’m only keeping 1. She gets the other 4. Tig has decided to give some of that to cancer research.

Tig, by the way, has since undergone a double mastectomy. She is doing well. Her doctors say her chances of survival are excellent. So she went there and came back. Her report from the frontlines of life and death are here for you to… Enjoy.

Please go to my site louisck.com and buy her show. You can buy it HERE.

Thank you. Have a terrific afternoon.