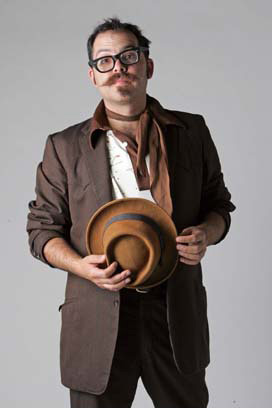 Ok I thought I have seen it all, but I was wrong. My good friend Chicken John (John Rinaldi), renown showman and master of chaos, has just officially announced that he is throwing his hat in the ring and is running for Mayor of San Francisco. The election takes place on Tuesday, November 6th and Chicken needs 10,000 signatures by July 26th in order to be a registered candidate. Here’s the petition (page1 & page2), just print it, fill it out and email Chicken so he can arrange for their pickup. Ok people, I have faith in you to make this happen.

So. There is a lot of stuff to talk about. But lets get something out of the way: running for Mayor of San Francisco isn’t something you do as a prank. As a joke. It would be an insult to the people who supported you and I think that making a mockery of the political system would be tameritous. Elections and other bodies of governmental working should be sacred, taken very seriously

There are many of us who came here to San Francisco from somewhere else looking for something. Seeking, if I may. Those who find it, never leave. They then become stewards of our city, allowing tolerance and experimentation of all levels so that other people who are seeking can come here and find what it is that they are looking for. They in turn become stewards… and so on. I have been thinking of leaving San Francisco. The billionaires have all come and kicked the millionaires out. Every day I see more construction. We exist in these micro bubble economies. Which is how I got to where I am in my thinking. Drawing a parallel between the SF of the 1800’s and now is very similar. Boom towns. A boom town economy is well documented. I think it would probably be a good time to leave a boom town while it’s still booming. Don’t wait for it to all dry up. But I feel a responsibility to SF. I feel a duty. That I have to serve this town that so many people with such a broad stroke of differences can come to agree on nothing else except the SF is a great place. I can’t just leave. Not without trying my best to fix it. And why not just go right to the top. I will now ask for your help in my next endeavor. In order to be on the ballot to compete with Gavin Newsome and the 22 other candidates for Mayor of San Francisco, I need to collect 10,000 signatures from registered voters. Or pay $5,000. I have the forms here:

It needs to be one piece of paper. Like, printed on both sides or they won’t accept it. It’s a petition. If 100 of you download 10 copies of the petition and get 100 people to sign it, that’s 10,000 signatures. But the signatures have to be of registered voters and the person collecting the sigs needs to be registered. There is a mountain of paper work that I am sifting through. There is matching funds for campaigns. There seems to be a very astute staff of the Dept. of Elections, in the *basement* of city hall. It’s all pretty neat.

My platform? What’s my platform, you ask? The bed of 1975 GMC pick ’em up truck that runs on coffee grinds. Party affiliation? I like to party. Party hardy. Issues? What about the issues? We’ll get to that later. For now, I need to get on the ballot. I need your help. Here’s how this works:

You download the pdf forms FRONT AND BACK ON THE SAME PAGE. 2 DOWNLOADS ON 1 PIECE OF PAPER OR THEY WON’T ACCPET IT. Ahem.
You get friends or whoever you can to sign it, follow the instructions.
You yourself need to be a registered voter in SF WITH A VALID VOTER THINGY WITH YOUR CORRECT ADDRESS.
You get as many people to sign as possible, 10,000 signatures is a lot. Only people who are registered voters in SF can sign. They check.
You write me email or call me and drop off the signatures before the 25th of July. They are due on the 26th.

This community that is so powerful and so *together* rises to the occasion and with little effort gets 10,000 signatures from registered voters. I get on the ballot, then we change the way politics is done by using our secret weapon: art & innovation. After we do that we stop *greenwashing this city* and I hold a raffle to see who gets to drive the truck that knocks down that fucking bow and arrow thing on Embarkadaro that insults each and every artist in SF. We shed some light on the fact that the Art Commission of SF has a $9 million dollar budget and spends 90% of it on administration costs and consultant fees. In our *green* city, Builders Resources (SF’s Urban Ore) is being squeezed out. Whatever. There is a giant land grab going on and none of it is being earmarked for temporary sculpture or anything like that. Slowly, it all gets nailed down and if you’re ‘in’ you can get a piece of the action. If you’re not ‘in’, then you get a form letter. I single handedly produce 50 times what the SF Art Commission does and I couldn’t get the director to answer a phone call for 4 months. Civil servant my entire ass. And on and on… there are things that affect us that we can defend that will be of benefit to all San Franciscans. And it’s all really easy.

My little visit with Berkeley politics with the closing of the Shipyard really rattled my cage. It was like trying to do the butterfly stroke in a swimming pool of cold maple syrup. It literally sucked life from me. There is no way things have to be that hard. It was actually disgusting. There must be comedy. There must… or all is lost…

There is no doubt that Gavin Newsome will likely be our next Mayor. But there is value in fighting the good fight even if ‘winning’ isn’t your main objective. I have engineered my entire life around the embrace of the amateur. To live life as art. Mediocrity is not an option. Samuel Beckett’s quote fills me with possibility and adventure: “Fail again. Fail better.” I honestly feel that right now San Francisco, the city of Art and Innovation, lacks whimsy. It lacks a decision making body that results in the manufacture of ‘Units of Interesting’. We need there to be a Units of Interesting factor in some of the decisions. The acronym sucks, or it would be the new catch-phraze. UoI. Whatever.

I will have forms here and there for people to pick up and I will (obviously) be using this list to promote and update. Stay tuned.

Some of Chicken John’s projects have included Circus Redickuless, You Asked For It!, The Odeon Bar, Ask Dr. Hal, Lost Vegas, BORG2, Cafe Racer Woodgas Pickup Truck, The Mechabolic (Burning Man 2007) and many others. For more on Chicken and his world, check out his website.

“City in a bottle”
The Economist

“In Re-election Bid, a Mayor Versus a Cast of Characters”
Jesse McKinley, New York Times

“Chicken Run: From B2 to City Hall in One Easy Step”
Future Boy, Business 2.0 Beta

“The Billionaires Have Kicked the Millionaires Out”
Dylan Tweney, Epicenter, Wired Blogs

“Who’s Running For Mayor: The Chicken And The Wolf”
Rita Hao, SFist