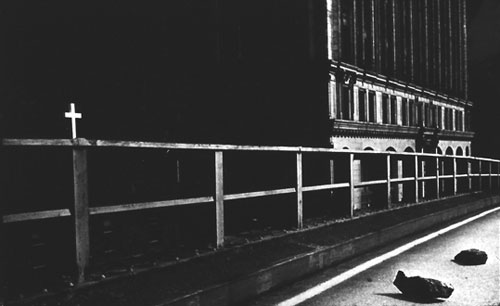 Legendary underground photographer Charles Gatewood has a new solo show of his haunting “Wall Street” photos from the 70’s called “Rags to Riches” coming up at The Lola Gallery in San Francisco. The opening reception is this Saturday, November 19th from 5pm-9pm and the show runs through January 21st, 2006.

Charles Gatewood has been photographing the American underground for over 40 years, published a dozen books and made numerous videos. His early photography was documentary in nature and had a distinct political edge. Between 1972 and 1976 he made frequent trips to New York’s financial district resulting in a series of photographs entitled “Wall Street”. Unlike other work that emphasizes sexuality and the idiosyncrasies and weirdness of human existence, these images are ethereal, formal and emotionally void with an underlying theme of capitalism and control. “Wall Street” illustrates the message that perhaps money and high finance constitute the real obscenity of our age. The black and white concrete desolation of these photographs provide a set of visual metaphors for that most secretive perversion of all, high finance.