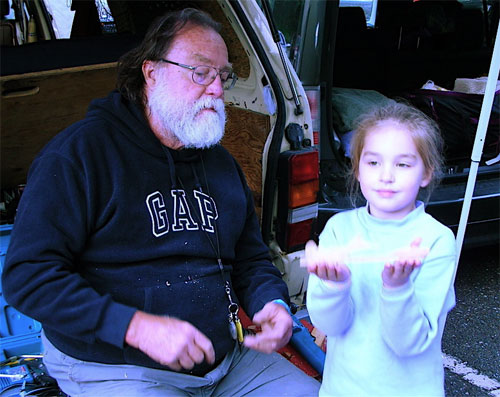 Jack Davis, the director of SomArts Cultural Center in San Francisco, had a heart attack last week and is now in recovery. Jack is a huge supporter of the local arts scene and Laughing Squid sends our best wishes out to him.

In any town, any scene, any time, you can count on the fingers of one hand the largely unheralded folks that facilitate almost everything thing of note that happens. They are there early on, giving quiet, confident encouragement â€“ and, as importantly for starving artists, the occasional big break in event cost or maybe various services provided but somehow unbilled. These two or three princes never expect anything in return other than to watch the blossoming and growth of what they consider to be (and usually are) the most worthy enterprises. Otherâ€™s who “make things happen” the individuals, deserving or not who do get the lion’s share of the credit â€“ you know who they are â€“ they’re in the papers, on the radio, these folks know who those two or three are and always owe them a debt.

Jack Davis is one of those princes. At crucial points in the life of almost any significant Frisco art endeavor/scene/ organization (underground or established,) Jack has, in some capacity, small or gigantic, been pivotal in its life and growth. As Director of SomArts Gallery in SOMA for the last twenty years, one of the largest, best and most easily accessible art/event/party places in the City, Jack and his wonderful staff have given untold thousands of nascent artists, community groups and provocateurs their first big or pivotal show and a grand forum for promulgating their ideas and spirit in the local scene. Many of these individuals and organizations have moved on to national prominence. Following is a very small sampling of groups that benefited from Jacks involvement and/or support: The Neighborhood Arts Program (one of the founders) this group kicked off most of local Cultural Centers, Intersection for the Arts (past Director,) S.F. Mime Troupe (Board Member,) Burning Man (first big in-town events in the early 90â€™s were at SOMARTs for extremely low cost,) Day of the Dead, The Farm,
Pickle Family Circus, Make a Circus, Dance Mission, Cellspace, S.F. Pride, Survival Research Labs (Jack held the cops off while Mark and crew got away!) The list goes on & on.

Jack suffered a bad heart attack late last week and is recuperating at a local hospital. He is a big, strong guy, and pretty damn stubborn â€“ I can’t imagine him not back at the helm pretty soon nor could anyone who has had the privilege of knowing him. His lovely, talented daughter Sara tells me he is not only expected to recuperate but that he’s requesting ice cream in the ICU and already planning to go back to work next week (hmmm? maybe he should rest up for a month or two?) If you know Jack or if your group has benefited in some way through his largesse, greetings and best wishes can be forwarded to him at: davis AT somarts DOT org or you can snail mail cards or whatever to:

If you are going to the Expo for the Artist & Musician, which takes place at SomArts, pause for a moment and think about Jack and all of the great stuff he has done for San Francisco.

UPDATE: Jack Davis passed away in September of 2007.