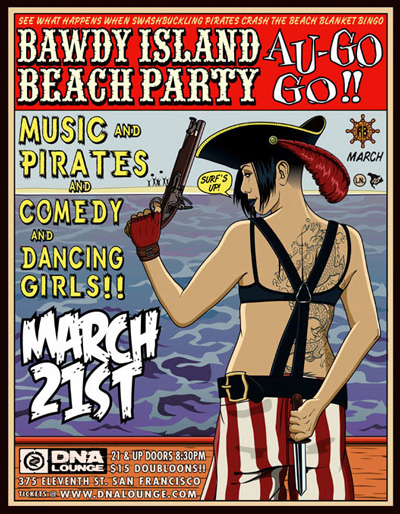 Pirates and Wendchs and such join forces at

Brethren of the coast and fellow corsairs, Beware!

The dastardly pirate crew The Ship Disturbers once again travel over the briny deep, headed home to their beloved bawdy island by the bay – San Francisco. According to captain Roger That’s map, there is a treasure trove of booty awaiting their return, but alas!

Much to their surprise, upon the arrival of their pirate ship “The Black Panties” they find that San Francisco’s premier burlesque performers have planned a groovy 60’s beach party on the very spot marked with a bold X on the map! good fortune prevails, there’s more booty here than any cache of riches the pirates ever could have imagined!