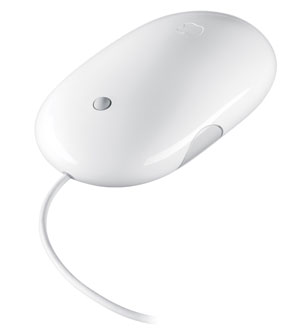 After years of insisting that a one-button mouse was much more efficient, Apple has finally changed its mind and has just released a two-button optical mouse, called Mighty Mouse. In addition to a 2nd button, they have included squeeze, roll, and scroll features. This will give Windows users one less reason not to switch. Even though you have been able to use non-Apple, two-button mouses with Macs for years, many Windows people were under the impression that if they switched to an Apple they would be forced into a one-button mouse situation. It will be interesting to see if this new mouse becomes the standard mouse that ships with all new Macs.

Mighty Mouse is the first multi-button mouse that retains the simplicity of a single-button mouse, and can be used as a single- or multi-button mouse depending on the userâ€™s preference. Mighty Mouse features a single seamless enclosure with programmable touch sensors that act as primary or secondary buttons. With a simple click on the upper right or left side of the mouse, users can instantly access features such as contextual menus found in Mac OS X and other applications.