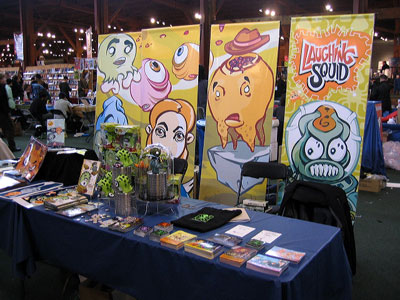 APE (Alternative Press Expo) 2005 takes place this weekend, Saturday, April 9th and Sunday, April 10th at the Concourse Exhibition Center in San Francisco. APE is the weird little baby brother to Comic-Con and WonderCon, with its focus being on underground and independent publishing.

APE celebrates the incredible spirit of self-publishing and the alternative comics press. The exhibit hall features an unbelievable mix of new and old comics, mini-comics, zines, art books, original art and much more.

Laughing Squid will be at APE sharing a table with Attaboy’s Yumfactory. Stop by to say hello and pickup some Laughing Squid stickers and post cards (including new ones from Jim Blanchard, Dan James and Aaron Blecha). You can find us at tables 350 & 351.

UPDATE: Here are my photos from this year’s APE.