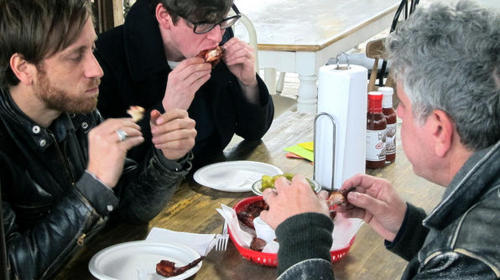 Anthony Bourdain is “abducted” by The Black Keys in their battered mini-van “of death and possible dismemberment” for the latest episode of Bourdain’s Travel Channel show No Reservations and taken to Woodyard Bar-B-Que in Kansas City, Kansas where they all enjoy a lunch of BBQ and bourbon. The episode will first air April 16, 2012 at 9 PM EST. A hilarious preview video of the episode is available and definitely worth checking out.

Bourdain discusses the episode on his blog in a post titled BBQ Apocalypse:

Well, after 8 years of NO RESERVATIONS, in which I have been allowed to travel this world unfettered and largely without constraint, I found myself once again thinking, “What’s the most ****ed up thing I can do on the show?” The answer, it seemed, was to embrace the beast. Go right back and do what would have been unthinkable back then (or at any time since): make a show about a subject that every single travel and food show has done a million times, in a place that has been more than adequately covered (as least as relates to slowly smoked meats). Go right to the heart of core Americana—that uniquely All-American genre of cookery called Kansas City Barbecue.

…And we would need music. Good music. More importantly, we would need cheap good music. Fortunately, I had recently become aware that the Dan Auerbach and Patrick Carney of THE BLACK KEYS were very fond of a good meal and were, after many years on the road, susceptible to offers of free food. In return for a lunch of chicken wings and ribs, they quickly agreed to drive their van from their hometown of Akron Ohio, to Kansas City and join me for an afternoon of bourbon and barbecue.