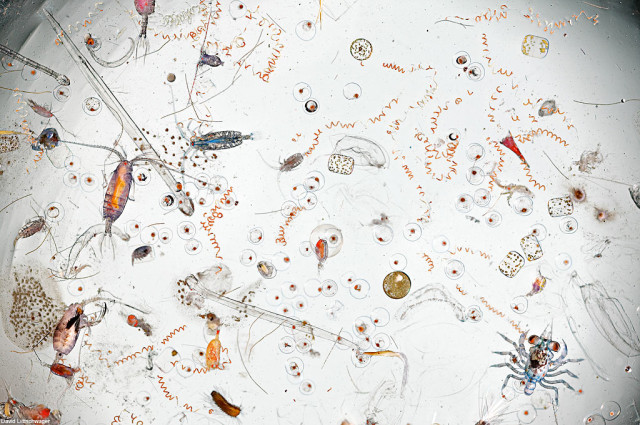 This incredible photo is of seawater magnified 25 times and features a variety of tiny creatures like crab larva and marine worms. The photo was taken by David Liittschwager off the island of Hawaii and published by National Geographic in 2007.

A dipperful of seawater can reveal a hodgepodge of tiny free-swimmers and nebulous drifters that fog the water column. Many are microscopic. Others would be visible except they’re virtually transparent. Gelatinous shape-shifters lazily ride the currents. Familiar forms in miniature—wide-eyed fish larvae, baby squid and octopuses—dart freely. Their lives are precarious. Some wear shells or exude toxins against predators; others are active only after dark. But untold numbers succumb to hungry mouths—each other’s or those of bigger foe.