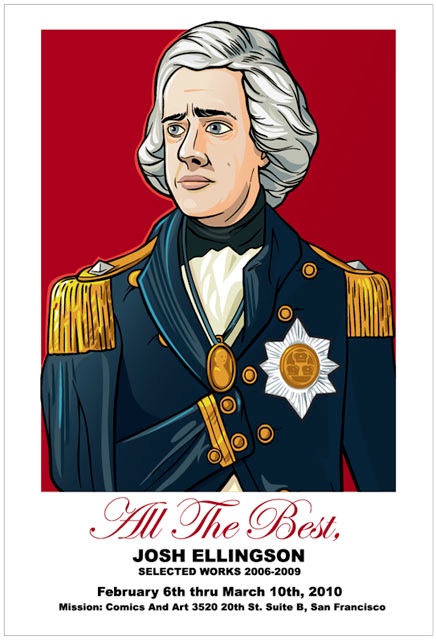 Laughing Squid guest blogger and long-time collaborator Josh Ellingson is having a solo art show “All The Best, Josh Ellingson Selected Works 2006-2009” at Mission: Comics & Art in San Francisco. The opening reception is Saturday, February 6th and the show runs through March 10th.

Mission: Comics & Art presents “All The Best,” by San Francisco artist Josh Ellingson, whose artwork draws inspiration from comic books, classic sci-fi movies, video games, pop-culture and the potential of the human mind. “All The Best,” highlights his recent work from 2006-2009. In his own words, Ellingson describes his work:

“I’m influenced by popular culture, particularly television and movies, and I’ve also always been a fan of comic books and collectible toys. I’m enamored with science and scientific advancements and lately, astronomy has had a big impact on my work. There’s something about the scale of the cosmic level that makes my brain buzz.”

Ellingson’s artwork has appeared in a variety of publications and online media, and in the fall of 2009, his piece “Dirty Martini and the Birth of the Space Program” was displayed on the International Space Station, as part of the Zero Gravity Art show organized by space-entrepreneur and creator of Ultima Online, Richard Garriott. His work was also recently presented by the Museum of Robots located in the virtual online environment of Second Life. In addition, Ellingson regularly contributes articles and reviews to the popular website Laughing Squid and the art/culture magazine Hi-Fructose, and is the director of the art and design collective space, The Local 303. He grew up with his grandparents in farmhouse in semi-rural Michigan, and has Visual Communications degree from the Kendal College of Art & Design in Grand Rapids, MI.