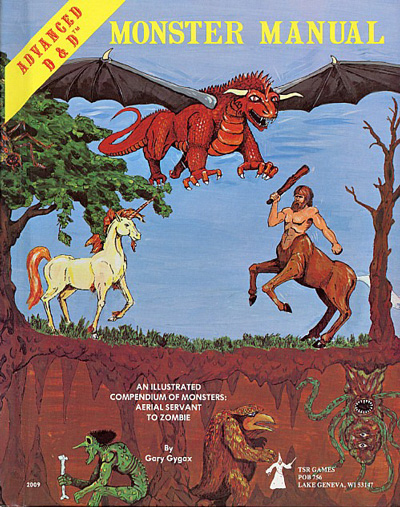 Sean Kelly has started playing the original Dungeons & Dragons again (pen & paper version) and he recently sent out his list of 10 Awesome Things About D&D:

1 – Rolling a Natural Twenty when the fight is on the line
2 – Leveling up
3 – 0 hit points, unconscious, possibly dead
4 – The 10‘ pole
5 – The druid spell Shillelagh
6 – Being a 1st level Halfling mage with 1 hit point and a dart
7 – Drinking ale in the tavern
8 – The planar asymmetric synergy of polyhedrons and lead figures
9 – Scimitars
10 – Treasure Type Q, the best Treasure Type

My list would have fighting a Beholder, those things were so badass.

What kind of things would make your D&D top ten list?

UPDATE 1: There are bunch of great comments coming in. The nostalgia spell I cast worked!

UPDATE 2: For those of you thinking about getting back into D&D and trying out the new 3.5 ruleset, here’s the Wizards of the Coast official website for Dungeons & Dragons. TSR, company formed by Gary Gygax that originally published D&D, was bought by Wizards of the Coast in 1997. D&D 4th Edition is scheduled for this May.

UPDATE 3: All of this talk of D&D made me think of Dungeon Majesty, a hilarious public access TV show from 2004 where four women play D&D and act out the various battle scenes with ridiculous green screen effects. 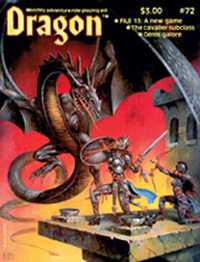 UPDATE 4: Remember the awesome Dragon magazine? Well I just read the sad news that after 30 years it stopped being published back in September, however, back issues are still available through its publisher Paizo. It’s great to go through there and just look at the covers of the issues I used to own.

Wade Rockett let us know that Dragon magazine editor Wolfgang Baur recently started the Kobold Quarterly to fill the void left by the end of Dragon.