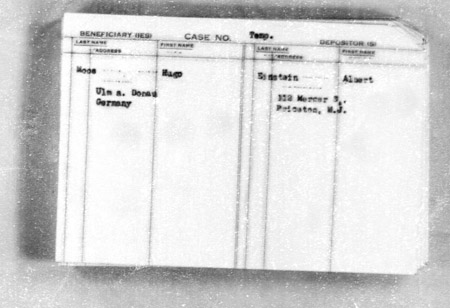 This small card shows that Albert Einstein made a deposit to help finance the emigration of a Jewish person named Hugo Moos from Nazi Germany during World War II. The card is from the archives of the American Jewish Joint Distribution Committee (JDC), a nearly century-old Jewish aid organization based in New York City that helped more than 81,000 Jews escape from Nazi-occupied Europe by financing and otherwise enabling their emigration. It’s unclear what became of Hugo Moos, though the JDC has found transit records for a child, Rudolf Hugo Moos, who escaped Europe aboard a ship in 1940.