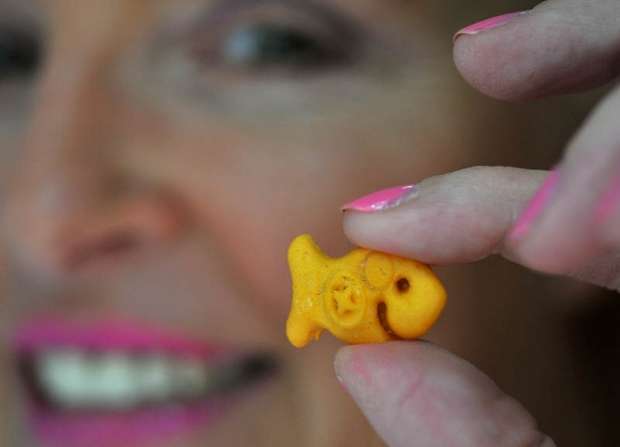 Melbourne, Florida resident Patti Burke was eating Goldfish Crackers during Holy Week when she discovered a unique one emblazoned with a “cross” in a circle. Burke believes it to be a sign from God stating, “When I picked this one up, I knew he was special. He had a cross on him, and he had a crown circle up by his head. Something I’ve never seen before out of all the Goldfish I’ve eaten.” She consumes “two or three pounds of Goldfish crackers in a week, one by one, looking for the saltiest of the snacks” and that she is now keeping her find in an “earring box padded by gauze.”

She contacted the company that makes Goldfish Crackers, Pepperidge Farm:

“I called Pepperidge Farm and said, ‘Hey, do you have some special promotion going on, I think I’ve got the lucky fish,’” she said. “They called me back and said there’s no way this could have been printed like that in the factory. … They said it sounds like something miraculous happened and we don’t know how it happened.”

Burke even tried to send the company pictures of the cracker, but said when she got the photos developed at Walgreen’s, none of the pictures turned out. 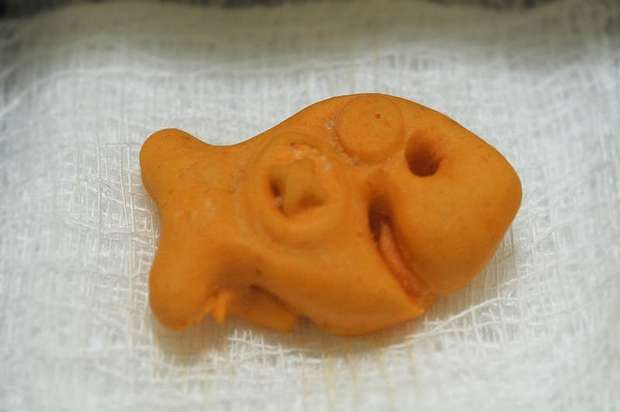