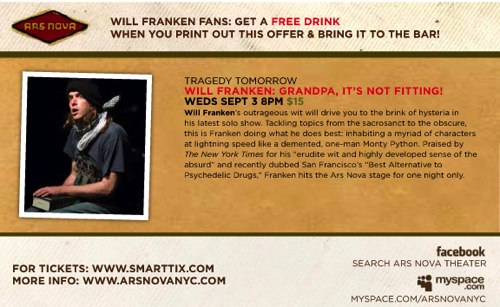 Brilliantly absurd comedian Will Franken is making his return to the theater world this Wednesday, September 3rd with the performance of his hit one man show “Grandpa It’s Not Fitting” at Ars Nova in New York City as part of their Tragedy Tomorrow comedy series.

Will Franken’s outrageous wit will drive you to the brink of hysteria in his latest solo show. Tackling topics from the sacrosanct to the obscure, this is Franken doing what he does best: inhabiting a myriad of characters at lightning speed like a demented, one-man Monty Python. Praised by the New York Times for his “erudite wit and highly developed sense of the absurd” and recently dubbed San Francisco’s “Best Alternative to Psychedelic Drugs,” Franken hits the Ars Nova stage for one night only.