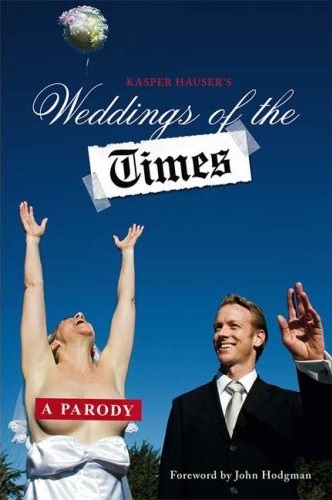 The sketch comedy group Kasper Hauser has two new books out this week. The first one is “Weddings of the Times” which is a parody of the New York Times wedding announcements. The book was featured on a recent episode of NPR’s All Things Considered.

You are cordially invited to celebrate

Along with fully illustrated guides to:
Wedding-night sex,
Honeymoon hot spots,
Formalwear malfunctions,
and much, much more.

At four o’clock in the Afternoon.
Or is it three o’clock?
Didn’t you bring the invitation?
Huh? Where the hell is the turnoff?
Back there. I think I saw a paper plate and some balloons.
What’s wrong?
I just need to eat something. I’m fine.
Remind me how we know these people? 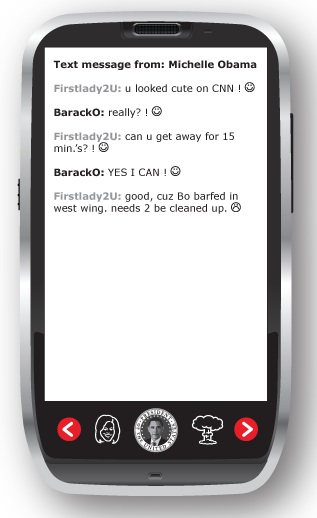 The other book released this week is “Obama’s Blackberry” which imagines what the president’s text messages might be like now that he was allowed to keep his Blackberry.

Now, for the first time, We The People are privy to our new leader’s epistolary back-and-forths on his wily hand-held device. We’re about to discover that his emails (and the replies, from his wife and daughters, Biden, Palen, Rush, Hannity, the new first puppy, and even Bush) are so tuned in to the language of electronic correspondence they come hilariously close to the brink of legibility.

This giftable, imagined glimpse into Obama’s beloved Blackberry traverses the mundane and momentous contours of the Commander in Chief’s life, from security briefings to spam, basketball practice to domestic bliss, and the panic of oops-I-hit-reply-all, to, of course, the trauma of dealing with the First Mother In Law.

Kasper Hauser is having a Book Release Show on June 16th at Cobb’s Comedy Club in San Francisco.