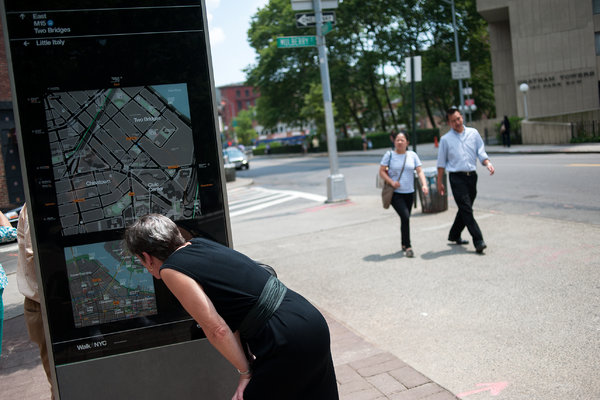 The New York City Department of Transportation has announced WalkNYC, a $6 million network of pedestrian maps spread throughout the city. The City plans to install about 100 WalkNYC maps in Midtown Manhattan, Prospect Heights, and Long Island City, Queens by the end of the summer and the Metropolitan Transportation Authority also has plans to replace its neighborhood maps with the new WalkNYC system.

The free-standing signs measure about eight and a half feet tall and anywhere from 18 to 50 inches wide, and feature a map oriented in the direction the viewer is facing, compass directions, neighborhood destination, nearby transit stations, and estimated walking times. The WalkNYC maps are already present at more than 300 Citi Bike Stations in the city, and the NYC Department of Transportation plans to expand the network of maps throughout the city by next year.

“You don’t need to be a tourist to feel turned-around on New York’s street and this first-ever unified pedestrian sign system is a step in the right direction,” said New York City Department of Transportation Commissioner Janette Sadik-Khan. “Whether on the sidewalks or before emerging from the subway, these signs will bring a common language to our streets and help knit together our neighborhoods.”