On the night of Thursday July 21st at The Walker Art Center in Minneapolis a world record will be set for saying the phrase “Opera has gone to the dogs,” because, well, it will have.

Tragedy on the Sea Nymph is a 10 minute silent film starring dogs who perform the romance and tragedy of clandestine lovers shipwrecked at sea. The film will be accompanied by five opera singers and the Cedar String Quartet. … (Plastic baggies will be provided.) 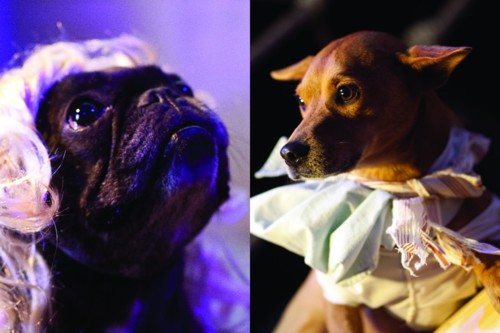 Tragedy on the Sea Nymph made it’s debut in LA in May of this year at Machine Project in Echo Park. It was written by Elizabeth Cline with music by Lewis Pesacov.

Elizabeth Cline is an artist and curator living in Los Angeles. During the day, she works as a Curatorial Associate at the Hammer Museum in Los Angeles where she produces artists projects in the Public Engagement Artist in Residence program. At night, she dreams and writes of the lives of dogs, roses and romance. Her next projects include a follow-up dog operetta set during the Gold Rush era.