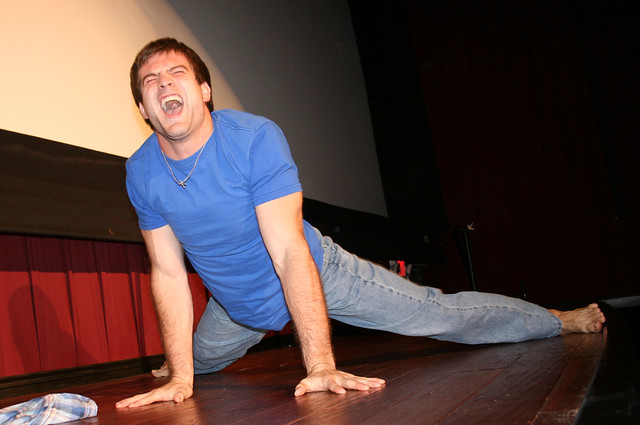 The World Air Sex Championships is like the US Air Guitar Championships, but with less fake guitar and more fake orgasms. The Air Sex 2009 Tour kicks off on June 6th in Austin traveling to 15 cities in 21 days with a competition at a The Independent in San Francisco on June 24th.

Never been to an Air Sex show before? Here’s what you need to know: it’s a lot like Air Guitar, but instead of rocking out with an imaginary guitar, you’re making sweet and/or filthy love with an imaginary sex partner. You choose a clip of music, you show up in whatever sort of wardrobe you like, and you come up on stage and show everyone how you do it. Or how you wish you could do it. Or how you once had it done to you, and oh my god was that a bad idea and while it’s embarrassing to show that act to a room of strangers, you know that you need to do it now in order to make sure that no one else falls down the same rabbit hole you got stuck inside. Or, you know, just do it however you want. The only rules we have are the laws laid down by the state we’re in. Since the Alamo serves alcohol, you can’t get naked. And since we serve food as well, all orgasms have to be simulated (or at least arguably so). Other than that, you’re free to do whatever it takes to impress the judges, the audience in the theater, and the world!