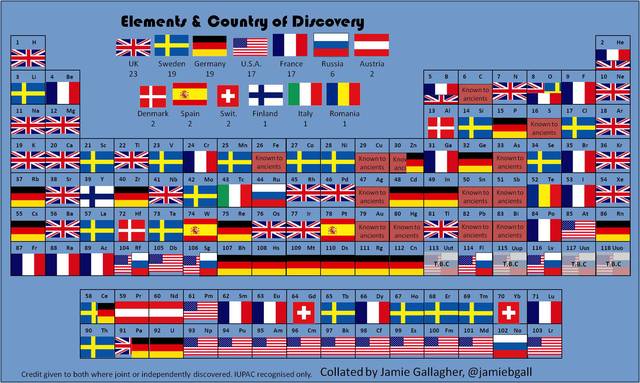 Science communicator and PhD student Jamie Gallagher has created a periodic table of the elements that shows which country each element was discovered in. Speaking to Smithsonian’s Smart News, Gallagher shared one of his favorite elemental discovery tales:

One of my favourites has to be polonium, though, the first element to be discovered by Marie and Pierre Curie. They were working in a modified shed with substances so dangerously radioactive their notes are still too active to be handled safely.

Working together they isolated this element and later named it Polonium after Marie’s home country. (A country, I may add, that turned her away from her pursuit of education as she was a politically interested female). It was her hope that by naming the element after Poland she could generate interested in the independence (from Germany) campaign for the country. Yet [in my periodic table] the victory comes in under the French flag where the work was carried out.

It remains to this day the only element to be named after a political cause, and a wonderful tribute to a phenomenal woman.

A larger version of the periodic table can be viewed at Smart News. Previously, we’ve written about clever periodic tables based on characters from Lord of the Rings, Star Wars, and The Muppets.