Christopher has been performing his unique one-man dance show with attached life-sized puppets for years, dressing himself and his puppets as Michael Jackson, the Black Eyed Peas, and more. With “The Dancing Queen”, he stars as a singing ventriloquist doll-like Red Queen with several cards (her “Royal Flush”) dancing to several popular songs. It’s a little difficult to explain, but it’s pretty amazing to watch. Note that even the puppets sing along.

You won’t believe your eyes when Christopher steps on stage to perform his amazing routine. Christopher is a complete, one-man ensemble! With life-sized human puppets attached to himself, he performs a show that is unlike what you have ever seen before! Including himself in the line up, Christopher performs with the life-sized dolls dancing to the tune of the Village People’s Y.M.C.A. and having the entire “group” dancing with him. Energetic, original, and very funny, it is something you have to see for yourself!

“Me as the Black Eyed Peas”

Here he is testing the puppet head: 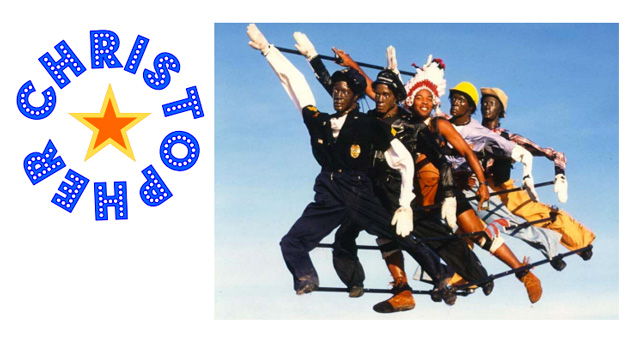