The AIDS Memorial Quilt has been made into an incredible interactive digital exhibit by Microsoft Research. The exhibit allows you to zoom in and out on the over 49,000 panels (representing over 94,000 names) of the quilt and experience it in a way that was not possible before. Microsoft Research worked with the University of Southern California and the NAMES Project Foundation to bring the quilt to the Internet and also created an online timeline of the quilt’s history. According to the NAMES Project Foundation, the quilt was started in 1987 by a group of San Franciscans who wanted to memorialize people who had died from AIDS. Donations to the NAMES Project AIDS Memorial Quilt can be made online.

The AIDS Memorial Quilt is a bit larger than the handicrafts in your average Home Economics class. The quilt is composed of more than 6000 blocks, each of which has eight panels. In total it comprises more than 49,000 quilt panels. 49K isn’t a lot when you are thinking about hard drive space but at this physical scale it is mind-shattering. The quilt is estimated to weigh more than 53 tons and if it were to ever be assembled it would cover more than 1.3 million square feet. That is more than 23 acres in. In fact, it’s so big that the National Mall in Washington D.C. can’t contain the quilt in its entirety for the display going on this month. Instead, it’s being split up into three sections and displayed in shifts by an army of volunteers who unload each panel off a truck, unpack it, spread it on the ground and, at the end of the day fold and repack each section. While the physical impact of the quilt is impressive, the emotional impact is on another level entirely. Each quilt panel was made by hand by an individual or group to memorialize a friend or loved one who lost their life to AIDS. As enormous as the quilt is, it represents only a fraction of those who have died. And it is still growing. The question that James, Topper, Lei, and all the other volunteers want answered is: When will the quilt be complete? When will we sew the final panel? 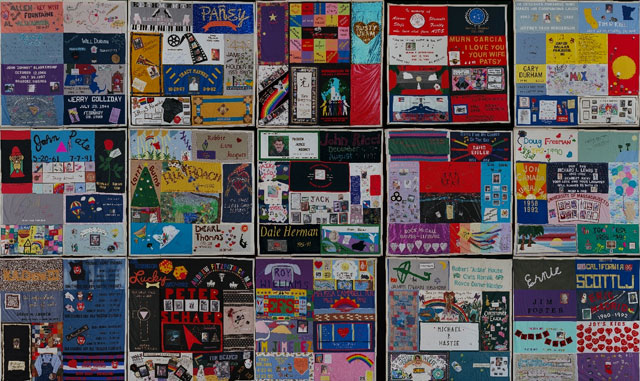