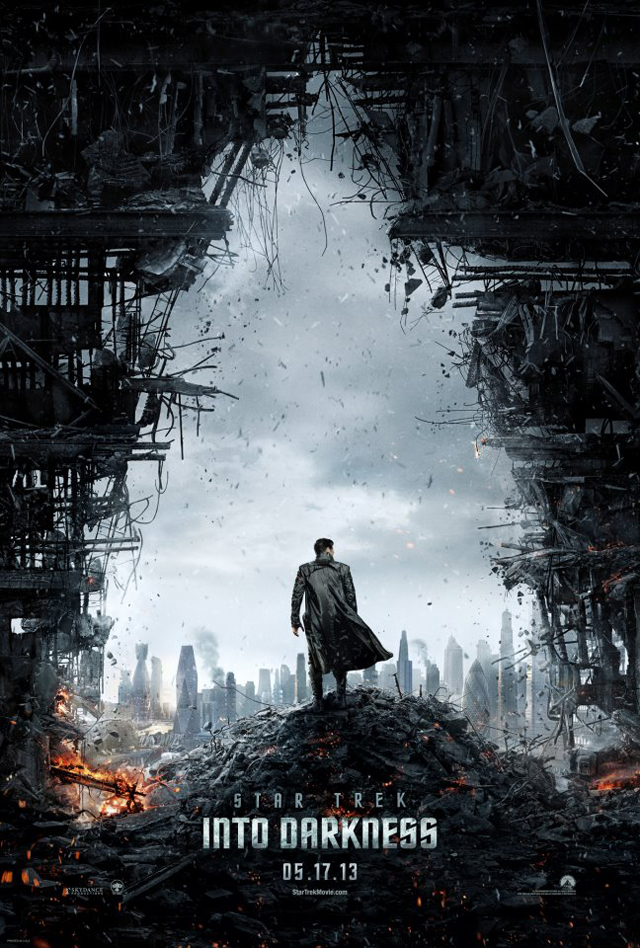 Paramount Pictures released teaser footage and a new poster that gives a gritty glimpse at the upcoming J.J. Abrams film sequel Star Trek Into Darkness scheduled to land in theaters on May 17, 2013. A lot is being kept under wraps by J.J. Abrams, but it is known that the original 2009 Star Trek hit film cast members will return, with an addition of actress Alice Eve (Sex and the City 2) and actor Benedict Cumberbatch (BBC Sherlock series). It has been long rumored that Benedict Cumberbatch will be playing the villainous role of Khan. According to a press release by Paramount Pictures, a 9 minute IMAX 3D preview of Star Trek Into Darkness will be released in approximately 500 IMAX theaters nationwide beginning on Friday, December 14th. Here is the official Star Trek Into Darkness plot summary from IMDB:

When the crew of the Enterprise is called back home, they find an unstoppable force of terror from within their own organization has detonated the fleet and everything it stands for, leaving our world in a state of crisis. With a personal score to settle, Captain Kirk leads a manhunt to a war-zone world to capture a one man weapon of mass destruction. As our heroes are propelled into an epic chess game of life and death, love will be challenged, friendships will be torn apart, and sacrifices must be made for the only family Kirk has left: his crew.