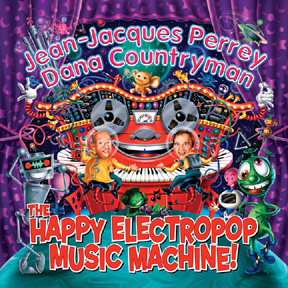 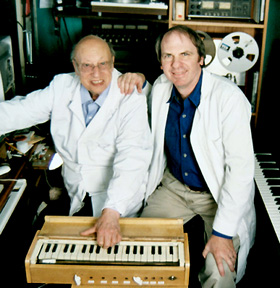 Tue Aug 29, 2006, 7:30pm: RE/Search presents the first ever JEAN JACQUES PERREY concert in America (in person, direct from France), at Recombinant Media Labs, S.F. 763 Brannan at 7th-6th Sts. Hardcore Jean Jacques Perrey fans are urged to fly in for this ultra-rare concert by the 77-year-old musique concrete genius, who has been absent from the stage for over three decades.

He will be accompanied by Cool & Strange Music publisher Dana Countryman, and their new album, The Happy ElectroPop Music Machine, will be available for autographing at the show. If you don’t know who Perrey is, we urge you to Google Jean Jacques Perrey and have your musical horizons considerably broadened. As interviewed in our Incredibly Strange Music Vol One book, Perrey proved it’s possible to infuse music with humor, the Dada spirit, and long-lasting beauty, too.

Jean-Jacques Perrey and Dana Countryman will also be performing on August 27th at The Triple Door in Seattle and on August 31st at the Knitting Factory in Hollywood.