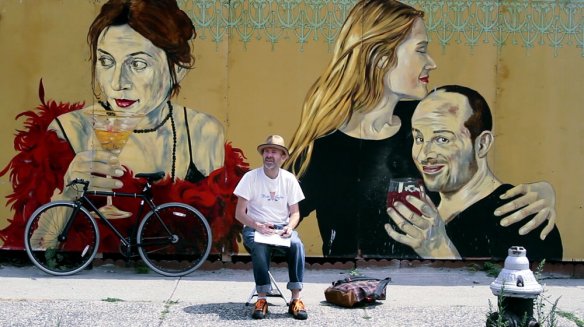 Red Hook is a beautiful short film about artist Tommy Kane made by Danny Gregory and his 17-year old son Jack Tea. Gregory, an illustrator too, wanted to create a film series about illustrated journaling that “capture the adventure of drawing, the discovery, the spirit, the fun”. They shot the entire film in just two days in Brooklyn, New York.

Here’s the newest film in the series, a portrait of my great friend, Tommy Kane, as he rides around his neighborhood in search of something new to draw. Tom is a great traveller — he regularly posts sumptuous journal pages made on his vacations and business trips. His favorite home-away-from-home is Korea and he has made many amazing drawings on its streets and in its markets.

This time, we decided he should travel through his own neck of the woods, see it anew like a visiting stranger and capture a mundane little corner and fill it with his particular brand of magic. Normally Tom works mainly on site, dragging out all of his materials onto the pavement around his little folding stool but instead we decided to expand the scene and show you some of Tom’s home and studio and incidentally some of the wonderful big paintings he’s done on canvas.

Red Hook is the second film in his illustration series created by Gregory, the first being The Art of Breakfast.