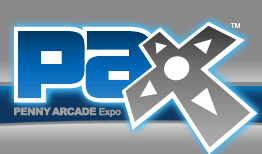 The annual Penny Arcade Expo (PAX), a giant video and computer game festival produced by the guys behind the popular online comic Penny Arcade, takes place this weekend in Seattle from August 24th through 26th. This year’s keynote speaker is Wil Wheaton and musical guests include MC Frontalot and Jonathan Coulton.

PAX is a three-day game festival for tabletop, videogame, and PC gamers. We call it a festival because in addition to dedicated tournaments and freeplay areas we’ve got nerdcore concerts, panel discussions, the weekend-long Omegathon event, and an exhibitor hall filled with booths displaying the latest from top game publishers and developers. Even with all this amazing content the best part of PAX is hanging out with other people who know their shit when it comes to games.