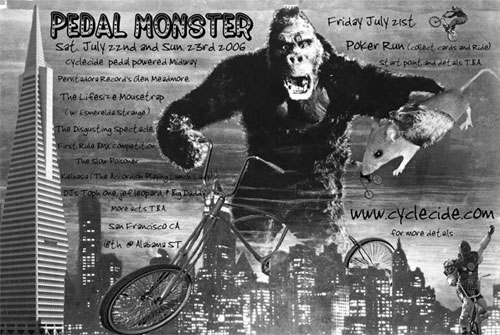 Cyclecide presents Pedal Monster, a massive convergence of mutant bicycle clubs and unique performances, which takes place throughout San Francisco this weekend from Friday, July 21st through Sunday, July 23rd. In fact this event is such a big deal, that San Francisco Mayor Gavin Newsom has declared this weekend “Cyclecide Weekend”!

Here are all the monstrous details:

BY MAYORAL PROCLAMATION, no, really, we’re not lying, the paperwork’s done and Gavin Newsom said so THE WEEKEND OF JULY 22-23 HAS BEEN DECLARED “CYCLECIDE WEEKEND” IN SAN FRANCISCO!!!

San Francisco’s CYCLECIDE BIKE RODEO is, as always, 2 DUM 2 DIE and ready to get hitched at City Hall, regardless of handlebar shininess or headtube length. In the wake of their countless tours across the country, insane and successful hometown shows, myriad television appearances, documentary films, festival headlinings, international fashion magazine modeling spreads (no really), and cultural blah blah and interactivity thus and so on and the for the Kids every which way, the Honorable Gavin Newsom and the City of San Francisco do hereby proclaim July 22-23 to be CYCLECIDE WEEKEND.

And in return, Cyclecide is proving its eternal love to the City and to the culture of the bike with a freakish, pedal-and-contraption-centric carnival of stupid and epic proportions. Mutant Bike Clubs from all of the U.S.A. will descend upon San Francisco — from as far away as Seattle, Reno, and New York — to carouse and joust and make out with local hotties. The Cyclecide Bike Rodeo will run around like a chicken with its head geeked off. There will be bands, shows, games, and general cacophony, the likes of which San Francycle has rarely seen. Accept no imitations CYCLECIDE REMAINS THE WORLD’S ONLY BIKE RODEO AND PEDAL-POWERED CARNIVAL MIDWAY! Even the mayor agrees.

Fri/21:
POKER RUN. Starts at darkish. Bar TBA on cyclecide.com. Wherein mutant bicycling fans and feisty cyclists are all invited to throw in $5 to participate in a multi-bar POKER GAME involving DRINKING and BICYCLING. There will be prizes and very probably some pie-fighting and light pavement-wrestling

-Interclub Tallbike Jousting, as seen on TV and in the 2003 film-festival hit documentary *Too Dumb To Die* — contestants include Neanderthals from out-of-town bike tribes, Doyle the 2005 World Tallbike Jousting Champion, and Gorgar the Vain and Belligerent Urine-Eating Monster

–The Life Size Mousetrap — the Rube Goldberg-inspired creation based on the children’s board game but instead of a net at the end there’s a 2-ton safe that smashes things. With three-a-day performances by sexy mice, cranky blue-collar clowns, and the one-woman-band Esmerelda Strange

The Disgusting Spectacle — a Giant Head Sculpture that Picks its Own Nose with an Equally Giant Pointy-Fingered Hand, Powered by a Human-Sized Hamster Wheel

The Outlaw Country of Hellbound Glory

Emceed by the Reverend David Apocalypse