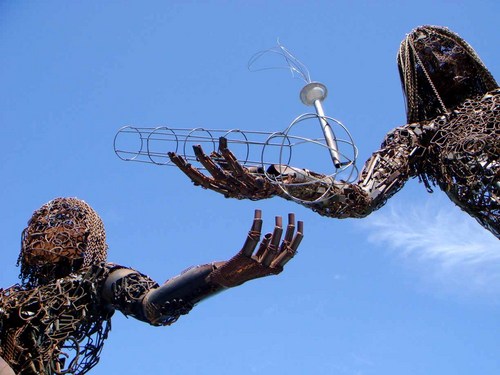 “Passage”, Dan Das Mann and Karen Cusolito’s sculpture of a mother and child, was altered over the weekend while the artists were off at Burning Man. Resourceful panksters managed weld a wireframe bong to the one of outstreached hands of the larger figure and a lighter to its other hand. Violet Blue went down there yesterday and shot some photos of the prank and has a full write-up on it over at Metroblogging San Francisco.

Knowing Dan and Karen, who have a pretty good sense of humor, they would probably not be too upset about this, since it appears that there was no major damage done to the sculpture and the alterations can be easily removed. Also, something tells me that the The Billboard Liberation Front is getting a big kick out of this one.

The sculpture, orginally created for Burning Man 2005, was installed by the The Black Rock Arts Foundation back in June and is located on Pier 14 on San Francisco’s Embarcadero. My guess is that it will be up there for a few more days, at least until the artists or BRAF staff return from Burning Man to remove it.

So far no group has come forward to claim responsiblity for this action.